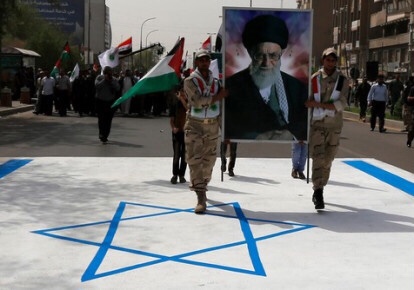 Iranian proxies in Iraq are training  for war against the US and will continue to fire rockets at US forces in Iraq until the US leaves, a new report says. Iranian-backed militias such as Asaib Ah al-Haq, Kataib Hezbollah and the Badr Organization have also been using “extreme measures to quell protesters, including opening fire on demonstrators,” the US said in a new report. The quarterly Lead Inspector General report for Operation Inherent Resolve pivoted in the last months to focus on Iran as the US is increasingly concerned about Iran’s threats to US forces in Iraq.

The unusual focus on Iran’s role in Iraq has been building over the last two years in these reports. The report draws on information from US Central Command, the Defense Intelligence  Agency, State Department and other reports.  The new report is unprecedented in focusing on Iran’s role. A special diagram shows the main aspects of Iran’s network of influence in Iraq through Qasem Soleimani. Soleimani was the IRGC Quds Force leader killed in a US airstrike on January 3. The US says that an Iraqi named Jamal Jaafar Ibrahimi was also killed by US forces travelling with Soleimani in the same strike that killed Kataib Hezbollah leader Abu Mahdi al-Muhandis.

Who was Ibrahimi? He was a member of the Badr Corps which fought against Saddam Hussein alongside Iran in the 1980s. He returned to Iraq in 2005, was elected to parliament and advised prime ministers. He became a Kataib Hezbollah commander. Then he was killed by the US.

Who else is on the list of Soleimani’s cohorts in Iraq? Hadi al-Amiri, leader of the BAdr Organization and Fatah Alliance party. The US sees the Fatah Alliance as a union of pro-Iran supporters. It is also home to militia members from the pro-Iranian Shi’ite militias or Popular Mobilization Units. Akram al-Kabi, leader of the Harakat Hezbollah al-Nujaba group. He broke off from Asab Ahl al-haq in 2012 to form the group and has said he would overthrow Iraq’s government if Iran gives him the order. He is a designated terrorist and has threatened US forces. Qais Khazali, leader of Asaib, is another part of the Iranian nexus. He visited Lebanon in 2017 and threatened Israel.

The US designated him a terrorist in December. Mohammed Al-Hashemi, also known as Abu Jihad, is another man the US points to. A member of the Fatah Alliance party, which is led by Badr’s Hadi al-Amiri, he is  a “key leader in the pro-Iran Bina Alliance,” the US says. The Us says he was linked to bringing former Prime Minister Adel Abdel-Mahdi to power in 2018. “He was a key ally of al-Muhandis and a conduit for the PMU influence in the prime minister’s office [in Baghdad].” Lastly there is Shibli al-Zayddi, a friend of Muqtada al-Sadr. He worked with Muhandis and the IRGC to form the Kataib Imam Ali units. The US has sanctioned him.

The US says Iran’s activity has hindered the US ability to fight Islamic State in Iraq. US forces are in Iraq at the invitation of the Iraqi government to fight ISIS. The recent US-Iran tensions were not  envisioned as part of this mission. There was controversy in December 2018 when US President Donald Trump said the US might us Iraq to “watch” Iran. Iraqi politicians linked to pro-Iran groups opposed the comments and have threatened to order the US to leave Iraq.

The picture the US report paints is one in which Iranian-backed groups have gunned down hundreds of protesters and are loyal to Tehran more than Baghdad. They worked with Soleimani and swear allegiance to Ayatollah Khamenei. They are willing to overthrow the Iraqi government or hijack it for their needs, as they have increasingly done. They target US forces and demand only those they choose can become Prime Minister.

The US says that from October to December “Iraqi militias aligned with  Iran carried out multiple attacks on US forces in Iraq.” This included the killing of a US contractor on December 27. According to the report CENTCOM thought the strike on Soleimani and Muhandis had weakened Iran’s role and the PMU. But the report says that rockets continue to be launched at US forces and the US embassy, including a January 26 attack.

Iran wants to use Iraq as part of its “land bridge” to Syria and Lebanon. The US doesn’t have much options to reduce the Iranian-backed  militia presence. The report says that the PMU partners with Iraqi armed forces on operations, “despite concerns about Iran’s influence over Iranian-aligned militias.” The US begrudgingly admits the PMU presence is a “net positive” in fighting ISIS.

The US concluded that, according to CENTCOM, “Iran funds, arms, trains and directs Shia militia groups in Iraq to wage a proxy war against the United States.”

Iran sends rockets and other munitions to the militias  and the US DIA says that these are meant to achieve an objective of disrupting and harassing US forces and to pressure the US to leave Iraq. “Iran sought to solidify Iranian influence within Iraq’s security infrastructure as a way to pressure the US to withdraw.”  CENTCOM now believes that as long  as the US maintains a presence in Iraq, Iran will seek to carry out harassing  attacks against US forces. Not only that, Iran will use the militias, who are also official paramilitaries of the government, to suppress  protests.

There are so many US concerns about Iran’s role in Iraq and Syria that the number of mentions of Iran run to almost 150 and an entire classified appendix is devoted to “Iranian activity in Iraq.” Iran’s role in Syria is not highlighted as much by the new report but the US  says it is protecting oil fields in Syria to prevent oil proceeds  going to Iran or the Syrian regime. The US is seeking the “removal of all Iranian-led forces and proxies in Syria.”

US Insists on a New Cold War

Israel Strikes Outside the Temple Walls After Palestinian Rockets Attacks