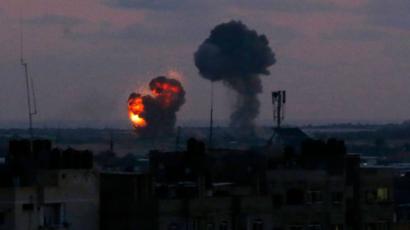 The mortar exploded in an open field near Kibbutz Kissufim, a Gaza border community, on Wednesday evening. It caused no injuries or damage, according to the Israel Defense Forces.

Two other explosives were launched from Gaza at the same time but did not clear the Gaza border, Ynet reported, citing the IDF.

Also Wednesday, several balloons carrying incendiary devices were launched from Gaza into southern Israel. The explosive devices were disarmed by police sappers. One of the homemade bombs was in a box with shiny wrapping paper.

The mortar was fired a day after President Donald Trump released the details of his Israeli-Palestinian peace plan.

The IDF hours later responded to the attacks with air strikes on Hamas targets in Gaza, including a weapons manufacturing site and underground infrastructure, the IDF said.

Not long before the rocket fire, the IDF said it was increasing security presence in the West Bank and on the Gaza border.

“Following situation assessments, it has been decided to reinforce divisions stationed in the West Bank and the Gaza Strip with additional combat troops,” the IDF said.

No group claimed responsibility for the mortar or the incendiary balloons.