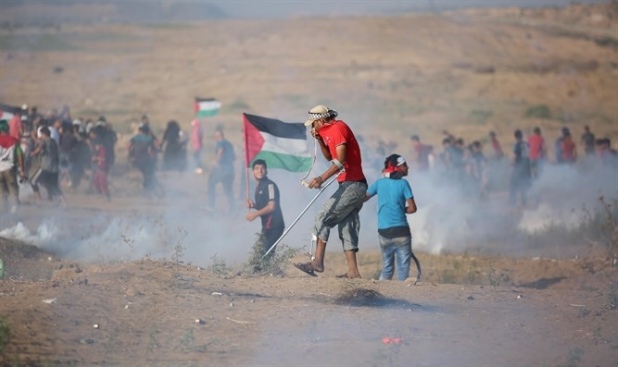 Protesters clash with Israeli forces at the Israel-Gaza border

Approximately 4,500 Palestinian Arabs protested on Friday near the Gaza border as part of the weekly “March of the Return” demonstrations.

During the demonstrations, explosives and firebombs were thrown at the border fence. Several suspects crossed the fence in the northern Gaza Strip and returned immediately to Gazan territory, reported Channel 13 News.

Palestinian Arab footage published by Channel 13 shows a military jeep allegedly hit by a smoke grenade thrown by the rioters.

The Hamas-run “health ministry” said that 31 Palestinian Arabs were injured during the demonstrations near the Gaza border, adding 12 of them were wounded by IDF live fire.

The “March of the Return” protests, orchestrated by Hamas, have been going on every Friday since March of 2018.

Last week, Hamas claimed a Palestinian Arab was killed by Israeli fire during the weekly clashes.

Last month, two Palestinian Arabs were killed by Israeli Fired in the weekly clashes. Hamas threatened to retaliate for the deaths, saying that Israel will “bear full responsibility for this crime.”

A week earlier, an IDF soldier was lightly injured during the violence.

(Arutz Sheva’s North American desk is keeping you updated until the start of Shabbat in New York. The time posted automatically on all Arutz Sheva articles, however, is Israeli time.)

How Babylon the Great Created the Nuclear Horns (Daniel)

The Hegemony of the Chinese Nuclear Horn (Daniel 8)