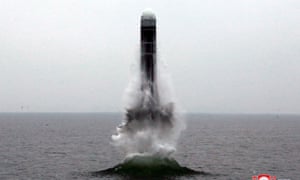 North Korea has confirmed it successfully launched a new ballistic missile from a submarine, in a move intended to raise pressure on the US as the two countries prepare to resume nuclear talks at the weekend.

Perfecting SLBM technology would significantly expand North Korea’s military options, enabling it to deploy missiles far beyond the Korean peninsula and giving it a “second-strike” capability in the event of an attack on its military bases. Missiles fired from underwater are also harder to detect before liftoff than ground-based missiles.

The KCNA state news agency said the test, in waters off its east coast, marked a “new phase” in containing the threat from “outside forces” – although it did specify the nature of that threat.

“The new-type ballistic missile was fired in vertical mode” in waters off Wonsan Bay on Wednesday, KCNA said, adding: “The successful new-type SLBM test-firing comes to be of great significance as it ushered in a new phase in containing the outside forces’ threat to the DPRK [Democratic People’s Republic of Korea] and further bolstering its military muscle for self-defence.”

Ankit Panda of the Federation of American Scientists described the missile, the Pukguksong-3, as Pyongyang’s longest-range-capable solid-fuel missile, adding that Wednesday’s launch was “unambiguously the first nuclear-capable missile test since November 2017”.

It isn’t clear if the missile was launched from a submarine, barge or some form of underwater platform.

Kim Dong-yub, an analyst from Seoul’s Institute for Far Eastern Studies, wrote on Facebook that the missile was probably fired from a specially built underwater barge. He said the missile is under development and that North Korea must test-fire it from a submarine before it can be deployed.

North Korea began testing SLBMs in 2015 and conducted four submarine launches by August 2016, when a two-stage solid-fuel Pukguksong missile flew about 500 km (310 miles) on a lofted trajectory. That test was considered a success.

The launch may be used as leverage in talks with the US due to resume at the weekend after months of stalemate, and with Pyongyang warning recently that engagement with Washington could unravel unless it comes up with new proposals by the end of the year.

Pyongyang has said that denuclearisation measures are contingent on the US making reciprocal actions, including the lifting of sanctions.

Kim Myong-gil, a former North Korean ambassador to Vietnam who will lead the North Korean delegation, arrived in Beijing on Thursday before flying to Stockholm, where the talks will take place, Kyodo news agency said, citing diplomatic sources.

South Korea’s joint chiefs of staff said the missile travelled about 450km (280 miles) in an easterly direction at a maximum altitude of 910km.

Photos of the launch in the official newspaper Rodong Sinmun showed a black-and-white painted missile emerging from the water and flying into the grey sky.

The North Korean leader, Kim Jong-un, “sent warm congratulations” to those who had carried out the successful test-firing, KCNA said, indicating that Kim was not at the site.

A State Department spokeswoman called on Pyongyang to “refrain from provocations” and to remain committed to the nuclear negotiations.

North Korea rejects those resolutions that ban Pyongyang from using ballistic missile technology, saying they are an infringement of its right to self-defence.

The launch was the ninth since Donald Trump and the North Korean leader, Kim Jong-un, met at the heavily guarded demilitarised zone (DMZ) between the two Koreas in June, and came soon after Pyongyang announced it would hold working-level talks with the US on Saturday – a development that could potentially break months of stalemate over North Korea’s nuclear weapons programme.

Talks aimed at dismantling North Korea’s nuclear and missile programmes have been stalled since the second summit between Trump and Kim in Vietnam in February ended without a deal.