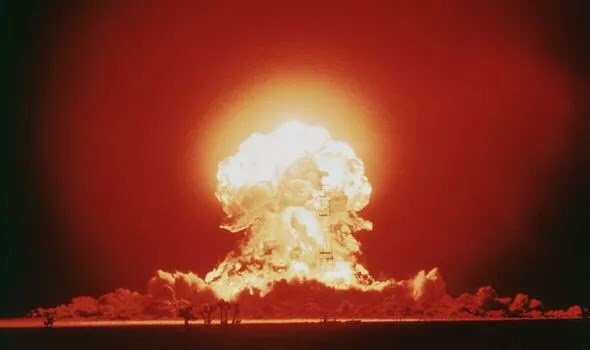 NUCLEAR war is the “single most existential risk” humanity faces and they have the ability to “end our species”, an expert has warned.

Simulation from Science & Global Security shows the possible escalation of nuclear war between the United States and Russia.

In April this year, a report from the House of Lords’ International Relations Committee said that “the risk of nuclear weapons being used is greater now than it has been since the Cold War.” The report cited “disintegrating relationships between nuclear possessor states, new capabilities and technologies” as the reason behind the escalated tensions, and one expert now believes it is the biggest risk humanity faces. Bryan Walsh, author of the existential risk book End Times, believes the threat of nuclear war far outweighs any natural disaster, such as a supervolcano eruption or an asteroid strike.

“Not asteroids, not disease, not artificial intelligence, but the old nuclear nightmare.

“There is no defence against them should they be used. They are weapons of war but primarily murder civilians.

There is no defence against them should they be used. They are weapons of war but primarily murder civilians” (Image: GETTY)

“They have the capacity to ruin the entire planet, even end our species.

“And after years of hopeful progress, we now somehow find ourselves in a moment of renewed peril.”

However, Mr Walsh does offer a glimmer of hope and believes the fate of nuclear war is in our own hands.

When the Bulletin of the Atomic Scientists – the organisation behind the Doomsday Clock – made their annual announcement this year, they also cited the threat of nuclear was as one of the main reasons for keeping the clock at two minutes to midnight.

The threat of nuclear war among powerhouses including the US, China and Russia remained a huge threat, said the scientists, with climate change also being a major cause for concern.

The organisers wrote: “Humanity now faces two simultaneous existential threats, either of which would be cause for extreme concern and immediate attention.

“These major threats—nuclear weapons and climate change—were exacerbated this past year by the increased use of information warfare to undermine democracy around the world, amplifying risk from these and other threats and putting the future of civilisation in extraordinary danger.

“There is nothing normal about the complex and frightening reality just described.”