The nuclear arms race is back … and ever more dangerous now

Donald Trump has increased spending on America’s arsenal while ripping up cold war treaties. Russia and China are following suit

Imagine the uproar if the entire populations of York, Portsmouth or Swindon were suddenly exposed to three times the permissible level of penetrating gamma radiation, or what the nuclear physicist Ernest Rutherford termed gamma rays. The outpouring of rage and fear would be heard across the world.

That’s what happened to the roughly 200,000 people who live in the similarly sized northern Russian city of Severodvinsk on 8 August, after an explosion at a nearby top-secret missile testing range. Russia’s weather service, Rosgidromet, recorded radiation levels up to 16 times higher than the usual ambient rate.

Yet the incident has been met with surly silence by Russia. It was five days before officials confirmed a blast at the Nyonoksa range had killed several people, including nuclear scientists. No apologies were offered to Severodvinsk residents. There is still little reliable information. “Accidents, unfortunately, happen,” a Kremlin spokesman said.

That callous insouciance is not universally shared. According to western experts, the explosion was caused by the launch failure of a new nuclear-powered cruise missile, one of many advanced weapons being developed by Russia, the US and China in an accelerating global nuclear arms race.

Vladimir Putin unveiled the missile, known in Russia as the Storm Petrel and by Nato as Skyfall, in March last year, claiming its unlimited range and manoeuvrability would render it “invincible”. The Russian president’s boasts look less credible now.

But Putin is undeterred. Denying suggestions that the missile is unreliable, the Kremlin insisted Russia was winning the nuclear race. “Our president has repeatedly said that Russian engineering in this sector significantly outstrips … other countries,” a spokesman said.

Now fast-forward to 16 August, and another threatening event: the test-firing by North Korea of potentially nuclear-capable ballistic missiles, the sixth round of launches since July. More than two years of vanity diplomacy by Donald Trump has not convinced Pyongyang it is safe to give up its nukes – proof, if it were needed, that unilateral counter-proliferation initiatives do not work.

Arms control experts say a consistent, joined-up international approach is woefully lacking. Thus Israel’s undeclared nuclear arsenal is tolerated, and the idea of a bomb developed by Saudi Arabia is no longer ruled out. But the merest hint that Iran may build a nuclear weapon is greeted with megatons of hypocritical horror.

In a sense, the problem is circular. Putin argues that Russia’s build-up is a response to destabilising US moves to modernise and expand its own nuclear arsenal – and he has a point. Barack Obama, the former president, developed a $1.2tn plan to maintain and replace the “triad” of US air, sea and land-based nuclear weapons.

Trump has gone much further. The Pentagon’s nuclear posture review, published last year, proposed an additional $500bn in spending, including $17bn for low-yield, tactical nuclear weapons that could be used on conventional battlefields. The first of these new warheads is due to become operational next month.

Critics in Congress say low-yield weapons make nuclear warfare more likely, and oppose Trump’s budget increases. But with US planners saying the biggest national security threat is no longer terrorism but nuclear-armed states, there is little doubt that many new weapons projects will get the go-ahead. 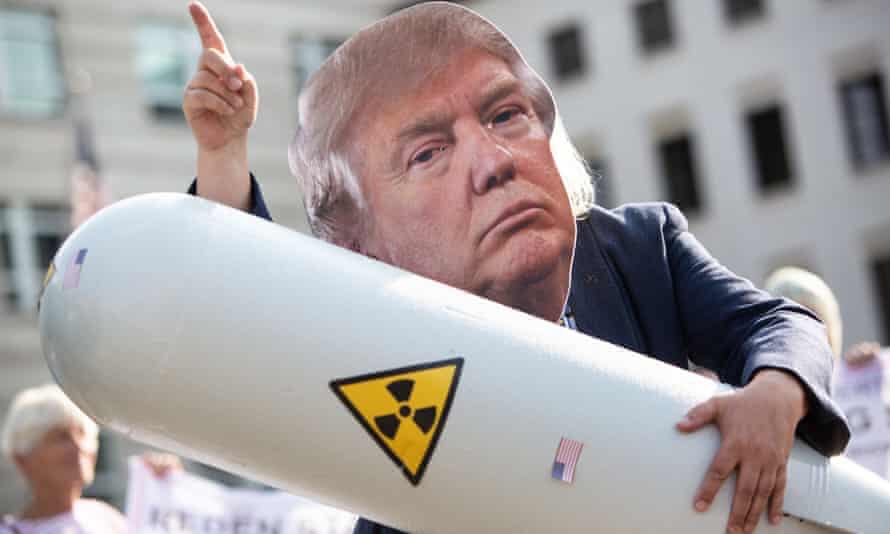 An activist in Germany wearing a Trump mask protesting against the scrapping of the INF treaty. Photograph: Omer Messinger/EPA

The renewed nuclear arms race is a product of Trump’s America First outlook and that of comparable ultra-nationalist and insecure regimes elsewhere. Trump’s emphasis on defending the “homeland” is leading inexorably to the militarisation of US society, whether at the Mexican border, on inner-city streets or in its approach to international security.

“We have far more money than anybody else by far,” Trump said last October. “We’ll build up until [Russia and China] come to their senses.” Outspending the opposition was a tactic employed by Ronald Reagan in the 1980s. And Trump is putting taxpayers’ money where his mouth is. Overall, annual US military spending is soaring, from $716bn this year to a proposed $750bn next year.

The paradox is that even as the risk of nuclear confrontation grows, the cold war system of treaties that helped prevent Armageddon is being dismantled, largely at Trump’s behest. Earlier this month, the US withdrew from the 1987 Intermediate-range Nuclear Forces (INF) treaty with Russia (which rid Britain and Europe of US missiles deployed in the early 80s).

The US is also signalling it will not renew the New Start strategic nuclear weapons treaty when it expires in 2021. Washington claims Moscow cheated on the INF pact; Russia denies it. But the real US concern is that both treaties tie its hands, especially regarding China – another example of the impact of America First thinking.

With a much smaller arsenal than the US and Russia, China, too, is “aggressively developing its next generation of nuclear weapons”, according to a major Chinese weapons research institute. Nor, given Moscow’s and Washington’s behaviour, has it an incentive to stop, despite Trump’s vague proposal for a trilateral disarmament “grand bargain”.

Like the US, China – while historically pledged to “no first use” – wants potential enemies to believe it may actually use tactical nukes. As Dr Strangelove would doubtless appreciate, this, perversely, increases the chances that it will.

The dreadful example these nuclear arms-racers are setting to non-nuclear states such as Iran is obvious. By failing to uphold arms control agreements, neglecting collaborative counter-proliferation efforts, and building new, more “usable”, dangerously unproved weapons like the one that irradiated Severodvinsk, the nuclear powers are digging their own graves – and ours.