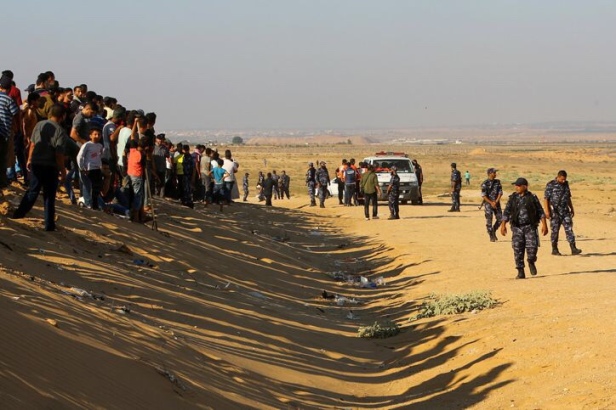 Palestinian security forces loyal to Hamas prevent demonstrators from getting closer to the border during a protest along the border with Israel, in Rafah, in the southern Gaza Strip on August 2, 2019.

Several thousand Palestinians protested along the Gaza Strip border on Friday, with dozens injured in clashes as rioters hurled stones and explosive devices at Israeli troops.

Israeli forces responded with tear gas and live fire to disperse rioters who approached the security fence and hurled projectiles.

Sixty-three Palestinians were injured by Israeli forces amid the clashes, including 32 by live ammunition,  according to the Palestinian health ministry based in Gaza.

Later in the evening, three rockets were fired at southern Israel from the Gaza Strip, causing no injuries or damage as one was intercepted by Israel and the other fell in open areas.

Tens of thousands of Palestinians have amassed at various flash-points along the Gaza border for the Hamas-backed protests nearly every week since March 30, 2017.

The protests often turn violent with demonstrators burning tires, hurling rocks and other incendiary devices across the border, and at times planting explosive charges along the security fence.

The demonstrations have given Palestinians an opportunity to put an end to the decade-long Israeli blockade of the impoverished Gaza enclave, which Israel says is necessary to isolate Hamas and ensure the security of its borders.

In past weeks, tensions on the border have flared amid there deadly clashes between Gaza militants and Israeli forces, leading Israel to bolster its defenses.

Israel is reportedly developing plans to build a massive wall in the northern section of the Gaza security fence in an effort to protect border communities from threats like terrorist infiltrations, attack tunnels and anti-tank weapons.