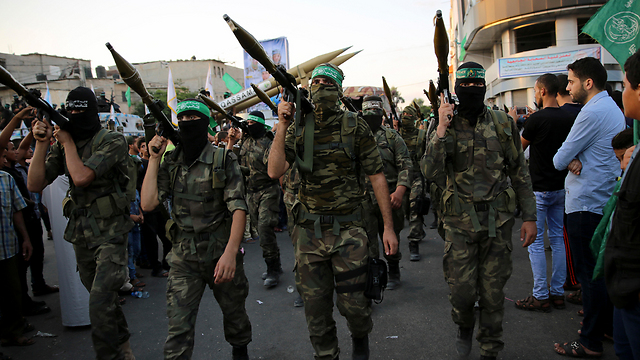 Two attacks on two borders in one day: Is the IDF ready for war on 3 fronts?

Two attacks on two borders in less than 24 hours. One targeted IDF troops stationed along Gaza, while another targeted Hezbollah positions in Syria’s Golan Heights. Two incidents, miles apart. Just a small indication of the major challenge Chief of Staff Lt.-Gen. Aviv Kochavi faces in the next war.

Before dawn on Thursday, hours after the army completed the largest drill since Operation Protective Edge five years ago, a Hamas terrorist armed with grenades and a Kalashnikov infiltrated into southern Israel near the community of Kissufim and injured an officer and two soldiers before being killed by IDF reinforcements.

Several hours later, Israel was accused of striking a Syrian Arab Army position in al-Bariqa west of Queintra on the Golan Heights.

Most Recent Videos from JPost

With fronts ripe for conflict to break out at any moment, the IDF’s ability to operate effectively on multiple fronts simultaneously is crucial for Israel to deal with the region’s unpredictable and explosive nature.

According to a report in Haaretz, Iran and Hamas have agreed to open a southern front should a war break out in the North. Israeli officials have warned that any northern war will not be confined to one border, but rather both the Lebanese and Syrian border.

That means war on three fronts.

The IDF, which has put Gaza as a top priority, is concerned that should a war break out in both the North and South, the military’s air defense might not be as available, leaving whole communities and cities vulnerable to rocket fire.

Israel has accused Iran of growing involvement in Gaza, both financially and militarily.

Hamas leader Yahya Sinwar has boasted about his close ties to Hezbollah and Iran, including with Maj.-Gen. Qasem Soleimani, commander of the Revolutionary Guards’ Quds Force. Hamas delegations have visited Tehran and met with Solemani and other senior Iranian officials following his appointment.

Despite facing its own economic crises, the Islamic Republic has increased its funding to Hamas and Palestinian Islamic Jihad (PIJ) to the tune of $100 million, to have more influence in Gaza. And in the West Bank, Israeli officials foiled around 130 Hamas terror cells in 2018 alone, up from the 40 foiled the previous year.

While the past few months have been “relatively” quiet in southern Israel, tensions with Gaza have significantly risen over the past year of weekly riots and occasional rounds of conflict, with thousands of rockets and mortars being fired at Israeli communities.

The IDF, in return, has struck hundreds of targets belonging to Hamas and PIJ (a group fully subservient to Iran) throughout the Strip.

Hamas, which itself is under intense public pressure due to the humanitarian situation in its territory, knows it cannot militarily survive another conflict with the IDF. But the army knows that another confrontation in Gaza, despite it being more prepared than before, will not end with it being a clear victor.

On top of that, the army is not too keen on another military operation in Gaza until the upgraded barrier to remove the threat of terror tunnels is completed, which is expected to be done by next summer.

And as Israel keeps its eyes warily on Hezbollah and Iran’s entrenchment in the Syrian Golan Heights, it is also looking toward Iraq. Iran is believed to have transferred ballistic missiles capable of reaching Israel to terrorist groups there.

Despite Israel’s missile defense capabilities being at an all-time high after successful trials of the Arrow 3 over Alaska this week, defense officials believe the advanced technological capabilities coupled with intensive firepower by the country’s enemies – be it from the South or North – will lead to unprecedented damage and fatalities.

Israel fought simultaneously in Lebanon and Gaza in 2006. But 12 years later Israel’s enemies have changed, and their military capabilities have increased tremendously.

“I get the impression that there is very high readiness for a possible campaign in Gaza,” Kochavi said during the four-day exercise this past week. “We will continue preparing, on the assumption that a conflict could erupt any day.”

The army under Kochavi needs to be ready: while the most imminent threat for war is on the southern front, the risk of a military confrontation in the northern arena, from three different countries at the same time, is not farfetched.

The Nations Trampling Outside the Temple Walls (Revelation 11)

The Plague Continues to Spread (Revelation 6:8)