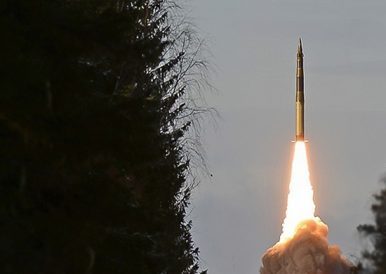 This marks the second test of a variant of the three-stage solid-fueled ICBM in 2019.

Russia’s Strategic Rocket Forces have test fired a road-mobile Topol intercontinental-range ballistic missile (ICBM) from the Kapustin Yar practice range in the Astrakhan Region in south Russia on July 26, the Russian Ministry of Defense (MoD) said in a statement.

“On July 26, 2019, a combat unit of the strategic missile forces conducted a test launch of an intercontinental ballistic missile of the Topol mobile ground-based missile system from the Kapustin Yar state central practice range in the Astrakhan region,” the MoD said.

The Topol ICBM reportedly hit its target in Sary-Shagan, located near Lake Balkhash in Kazakhstan, about 1,600 kilometers from the Kapustin Yar ballistic missile test site. All test objectives were met, according to the MoD.

The Topol variant test launched on July 26 was reportedly a RT-2PM Topol (NATO reporting name: SS-25 Sickle). The Russian MoD in the past has also identified the missiles used in these experimental test launches as Topol-E, “an experimental missile for conducting the trials of new types of ICBM,” according to TASS news agency. The RT-2PM Topol first entered service in 1985. The ICBM is expected to be phased out in the coming years and will be replaced by an upgraded Topol variant.

The last test of a Topol ICBM, the Topol MR (aka RS-24 Yars/NATO reporting name: SS-27 Mod2 or SS-29),  took place in February 2019. Notably, the stated aim of the February 2019 test launch was “to check, tactical, technical and flight characteristics of the prospective missile system,” according to the MoD, which could refer to the development of a new maneuverable reentry vehicle (MaRV), decoys or other penetration aids. There have also been reports of a new independent post-boost vehicle (IPBV).

As I explained at the time, IPBVs allow “for more complex and flexible targeting by maneuvering to position and then releasing multiple independently targetable reentry vehicles (MIRVs) midcourse outside the earth’s atmosphere.” Furthermore: “IPBVs can release MIRVs sooner than conventional ICBMs, which consequently allow the individual warheads to chart a course that is much more independent of the ICBMs main trajectory.”

The RS-24 Yars ICBM reportedly entered service in 2010. The RS-24 Yars is a three-stage solid fueled ICBM, with an estimated range of over 10,000 kilometers, and can deploy active and passive decoys. The RS-24 Yars can reportedly carry three to six MIRVs with each warhead having a yield of 150 to 250 kilotons. The missile reportedly takes seven minutes to launch.

The Topol-M (aka RS12M2/NATO reporting name: SS-27) also is a three-stage solid fueled ICBM with a reported maximum range of around 11,000 kilometers. The missile carries a single 550-kiloton nuclear-tipped warhead. In October 2017, the Strategic Rocket Forces fired four Topol-M ICBMs as part of a routine exercise.

All remaining RT-2PM Topol ICBMs are expected to be replaced by Topol-M and Topol-MR systems by the middle of the 2020s.