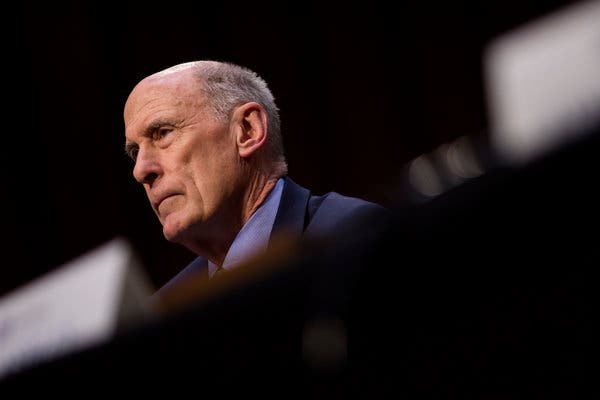 WASHINGTON — President Trump announced on Sunday that Dan Coats will step down as the director of national intelligence after a tenure in which the two were often at odds over Russia, North Korea and the president’s own attacks on the intelligence community.

“I am pleased to announce that highly respected Congressman John Ratcliffe of Texas will be nominated by me to be the Director of National Intelligence,” Mr. Trump tweeted. “A former U.S. Attorney, John will lead and inspire greatness for the Country he loves. Dan Coats, the current Director, will be leaving office on August 15th. I would like to thank Dan for his great service to our Country. The Acting Director will be named shortly.”

Mr. Ratcliffe has been a staunch defender of Mr. Trump. As a member of the House Judiciary Committee, he sharply questioned Robert S. Mueller III, the former special counsel, at last week’s hearing.

Mr. Coats had long been expected to depart of his own accord, an administration official said, but he ended up staying on longer so it would not seem as if he was forced out during a time of conflict with Mr. Trump. In a meeting last week, Mr. Coats told Mr. Trump and Vice President Mike Pence that he was ready to move on.

A spotlight on the people reshaping our politics. A conversation with voters across the country. And a guiding hand through the endless news cycle, telling you what you really need to know.

Mr. Coats, who helped devise President George W. Bush’s compassionate conservative agenda, had been an important link between the Trump administration and the Republican establishment. With Mr. Coats gone, those ties, at least on national security matters, are likely to weaken.

But Mr. Trump’s grip on the Republican Party has only strengthened, and he has long since demonstrated that members of the party’s establishment need his support far more than he needs theirs.

Mr. Trump’s frustration with Mr. Coats was reignited in recent months, during spring weekends spent at his private club in Palm Beach, Fla., according to people who spoke with him at the time.

Mr. Trump had weighed firing Mr. Coats since he took issue with the president’s assertions, after a 2018 meeting in Finland with President Vladimir V. Putin of Russia, that challenged the intelligence community’s conclusions that Moscow interfered in the 2016 presidential race. Mr. Coats also questioned the wisdom of a potential White House meeting between the two leaders.

Some of the president’s political advisers had encouraged him to oust Mr. Coats, but he had been shielded by Mr. Pence, a longtime protégé. Mr. Coats served as a senator from Indiana, and Mr. Pence was the state’s governor.

His pending departure has been whispered about in Washington for weeks, and Axios first reported on Sunday that Mr. Ratcliffe was the favorite to replace him. The New York Times then reported that Mr. Coats’s resignation was imminent.

Mick Mulvaney, the acting White House chief of staff, favored Mr. Ratcliffe as a replacement for Mr. Coats, as did several of Mr. Trump’s more conservative allies, according to administration officials. However, others in Mr. Trump’s group of advisers were skeptical that Mr. Ratcliffe was the right choice. Mr. Ratcliffe’s name has periodically been floated for attorney general, a job he is said to prefer over the intelligence director post, but one unlikely to be available anytime soon.

In picking Mr. Ratcliffe, the president tapped a lawmaker who, unlike Mr. Coats, has come to his defense against the investigation into Russia’s efforts to aid Mr. Trump’s campaign in 2016.

Mr. Ratcliffe met privately with Mr. Trump at the White House on July 19, according to administration officials, to discuss whether he would take the job. Less than a week later, Mr. Ratcliffe accused Mr. Mueller of not following Justice Department guidelines when the special counsel said he could not exonerate the president on obstruction of justice. If a special counsel cannot bring charges, he should not presume to say a target was not cleared, Mr. Ratcliffe said.

“So Americans need to know this as they listen to the Democrats and socialists on the other side of the aisle as they do dramatic readings from this report that Volume II of this report was not authorized under the law to be written,” Mr. Ratcliffe said of the portion of Mr. Mueller’s report that described how the president sought to impede the investigation.

“It was written to a legal standard that does not exist at the Justice Department, and it was written in violation of every D.O.J. principle about extra-prosecutorial commentary,” Mr. Ratcliffe added. “I agree with the chairman this morning when he said Donald Trump is not above the law. He’s not. But he damn sure shouldn’t be below the law, which is where Volume II of this report puts him.”

Critics disagreed with Mr. Ratcliffe’s conclusion, noting that department guidelines call for a special counsel to provide a report “explaining the prosecution or declination decisions” at the end of an investigation.

Before the Finland meeting, Mr. Coats had become increasingly vocal in defending the intelligence agencies and their assessment that the Kremlin has been pursuing a campaign of cyberattacks aimed at undermining American democracy. Though Mr. Coats has long held those views, he made a deliberate decision to emphasize the intelligence agencies’ findings before the summit, in what some saw as a challenge to the White House.

At a security conference in Aspen, Colo., soon after, Mr. Coats expressed surprise about reports that Mr. Trump could invite Mr. Putin to the White House. “That is going to be special,” he said in a notably unguarded moment.

Political aides to Mr. Trump seized upon the performance to suggest in private discussions that the intelligence chief was disloyal.

After the Aspen appearance, Mr. Coats adopted a lower profile, avoiding any comments that contradicted the president. But Mr. Coats has also tried to protect national security officers from Mr. Trump’s criticism.

Mr. Coats took the lead in a Jan. 29 presentation of global threats that was at odds with Mr. Trump’s views. The president the next day called his intelligence chiefs “passive and naïve.”

The report, and Mr. Coats’s testimony before the Senate, said North Korea was unlikely to give up its nuclear stockpile, Iran was not immediately taking steps to build a nuclear weapon and the Islamic State was still capable of stoking violence in Syria — all facts at odds with Mr. Trump’s worldview.

In a speech to intelligence officers in January, Mr. Coats said it was their duty to seek the truth about the world. “And when we find that truth, to speak the truth,” he added.

With the departures from the administration at the end of 2018 of Defense Secretary Jim Mattis and Nikki Haley as ambassador to the United Nations, Mr. Coats was one of the last establishment senior national security figures in the Trump administration.

But in recent months, Mr. Coats discovered that even as he tried to stick to factual assessments of national security threats, it was difficult to align himself with the president.

There was no greater point of friction between the men than Russia. Time after time, the White House has sought to weaken Mr. Coats’s language regarding the Kremlin.

Mr. Coats argued for a view of Russia as an adversary and pushed for closer cooperation and stronger ties with traditional American allies in Europe, nations that have been the focus of Mr. Trump’s ire as he sought closer relations with Moscow and wavered on whether Russia interfered in the 2016 election.

A secret report by Mr. Coats about Russian interference in the 2018 midterm elections contained a harsh assessment about Russia’s efforts to influence the American public by stoking conspiracy theories, inflame positions and polarizing the American population. But the public statement released by Mr. Coats’s office and edited by the White House contained little of the tough language.

Intelligence officials had expected a fall departure for Mr. Coats, perhaps soon after Labor Day. He was scheduled to speak at an annual intelligence conference in September, and some American officials said they expected him to depart soon after that. But Mr. Coats ultimately did not wait.

Mr. Ratcliffe, who served as mayor of Heath, Tex., and as a United States attorney, boasts on his website that he once “arrested 300 illegal aliens in a single day.” He was elected to the House in 2014, ousting Representative Ralph Hall, who at 91 was the oldest member of the House in history, in a Republican primary with the support of Tea Party activists.

Mr. Ratcliffe quickly established a reputation as a stalwart conservative. He has a 96 percent lifetime rating by the American Conservative Union and earned a 100 percent in the most recent ranking by Heritage Action for America.