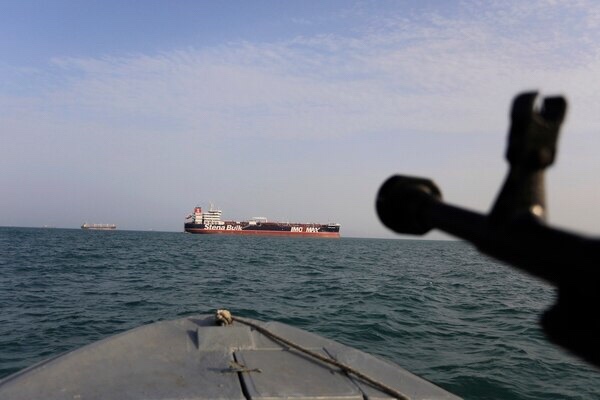 TEHRAN, Iran — President Hassan Rouhani suggested on Wednesday that Iran might release a U.K.-flagged ship if Britain takes similar steps to release an Iranian oil tanker seized by the British off Gibraltar earlier this month.

His remarks could create an opening to reduce tensions as Boris Johnson becomes prime minister. It’s unclear how the new government will respond to Rouhani’s suggestion or the impasse with Iran.

“We do not seek the continuation of tension with some European countries,” Rouhani said in comments carried on his website.

“Should they be committed to international frameworks and give up their wrong actions, including what they did in Gibraltar, they will receive a proportional response from Iran.”

In this July 21 photo, a speedboat of Iran’s Revolutionary Guard trains a weapon toward the British-flagged oil tanker Stena Impero, which was seized in the Strait of Hormuz on Friday. (Morteza Akhoondi/Tasnim News Agency via AP)

Britain this week announced plans to develop and deploy a Europe-led “maritime protection mission” to safeguard shipping in the area after Iran’s Revolutionary Guard seized the Stena Impero in the Strait of Hormuz on Friday.

Rouhani said that while Iran does not seek a military conflict, it will not allow threats to its security in the important waterway. He described the Iranian seizure of the ship as “professional and brave.”

Iranian officials have alleged the ship was seized after it violated international maritime law by turning off its signaling for longer than is allowed and passing through the wrong channels.

However, Iranian officials have also suggested the ship was seized in response to Britain’s role in impounding an Iranian supertanker two weeks earlier off the coast of Gibraltar, a British overseas territory.

The U.K. says the tanker was suspected of violating sanctions on oil shipments to Syria.

Both sides have called the interception of one another’s ships “hostile acts” and “piracy.” 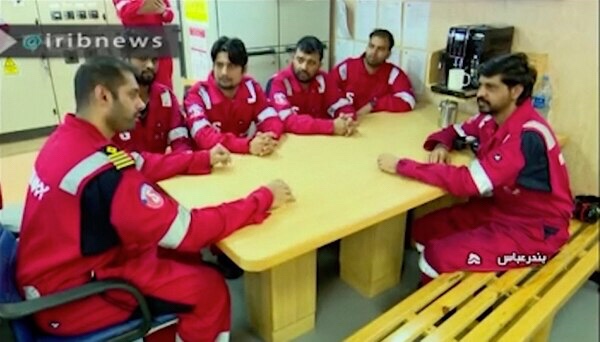 <img src=”https://www.armytimes.com/resizer/ic-KxoQorwj9_HwGMfViy9BqKwA=/600×0/filters:quality(100)/arc-anglerfish-arc2-prod-mco.s3.amazonaws.com/public/HNCXDI72E5CVZHGOUBDGBQ4X2M.jpg&#8221; alt=”Crew members of the British-flagged tanker Stena Impero, which was seized by Tehran in the Strait of Hormuz on Friday. (IRIB News Agency via AP)”/>

Crew members of the British-flagged tanker Stena Impero, which was seized by Tehran in the Strait of Hormuz on Friday. (IRIB News Agency via AP)

Stena Bulk, the owner of the ship being held by Iran, said it made first contact Tuesday evening with the crew of 23 since its seizure five days ago.

The company said the ship’s master advised “that everyone was safe with good cooperation with the Iranian personnel on board.”

The crew are mostly Indian, but also include Filipino, Russian and Latvian nationals. Iranian state TV aired video of the crew onboard the vessel off Iran’s port of Bandar Abbas earlier this week.

A spate of incidents in past weeks has threatened security in the Strait of Hormuz, which lies between Iran and Oman. Tensions have also soared following President Donald Trump’s decision last year to withdraw from the nuclear deal and impose maximal sanctions on Iran.

One-fifth of global crude passes through the Strait of Hormuz, making it an internationally important chokepoint for global energy supplies from Gulf exporters.

In past weeks, Iran has shot down a U.S. spy drone, U.S. officials say military cyberforces struck Iranian computer systems that handle missile and rocket launchers, and six oil tankers have been sabotaged near the strait. 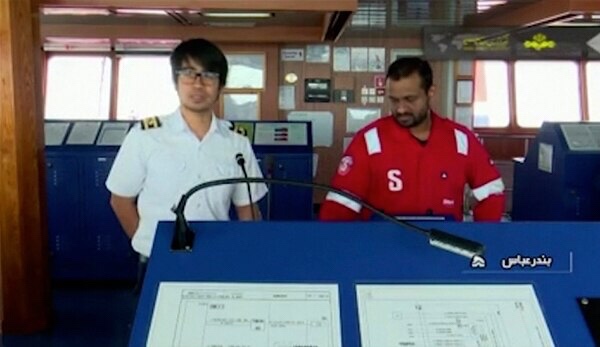 <img src=”https://www.armytimes.com/resizer/mBi2QJ0ZqaExCaSMbNTa9SHSq8A=/600×0/filters:quality(100)/arc-anglerfish-arc2-prod-mco.s3.amazonaws.com/public/UJYPXAC6GJHH7DTYJJX7G3LIIQ.jpg&#8221; alt=”State-run IRIB News Agency aired on Monday images depicting the crew of the British-flagged tanker Stena Impero that was seized by Tehran in the Strait of Hormuz on Friday. (IRIB News Agency via AP)”/>

State-run IRIB News Agency aired on Monday images depicting the crew of the British-flagged tanker Stena Impero that was seized by Tehran in the Strait of Hormuz on Friday. (IRIB News Agency via AP)

Iranian officials on Wednesday reiterated their denial that any Iranian drones were intercepted, after the U.S. military said Tuesday that it took aim at two of them last week.

U.S. Central Command said one Iranian drone crashed into the sea after the amphibious assault ship Boxer took “defensive action” against it last Thursday. It said the Boxer also “engaged” a second Iranian drone at the same time, but could not confirm it was destroyed.

Iran’s defense minister, Gen. Amir Hatami, told reporters Wednesday that “if someone claims he should provide evidence,” adding that “none of our drones have been intercepted.”

Despite a U.K. government advisory that British-flagged ships avoid the Strait of Hormuz, a large British-flagged vessel transited the corridor and arrived at a port in Qatar on Wednesday.

Maritime publication Lloyd’s List identified the vessel as the BW Elm and reported that a British warship, likely the Type 23 frigate Montrose, closely shadowed the large liquefied petroleum gas carrier but that the Royal Navy did not provide a direct escort.

The Ministry of Defense declined to specifically comment on the transit and referred to recent comments made by Foreign Secretary Jeremy Hunt, in which he the confirmed the Montrose has accompanied more than 30 ships over the last ten days through the strait.

In a statement to the AP, the ship’s owner BW LPG declined to comment on specifics, but noted protection by the navy.

“BW LPG is grateful for the UK and international community for their naval presence in the area providing security to merchant vessels transiting” the Strait of Hormuz, the company said, adding that it is operating “at our highest security protocol.”