Mohammed al-Judeili was hit by a rubber bullet at a border protest in May, Hamas-run ministry says; IDF says it is looking into incident 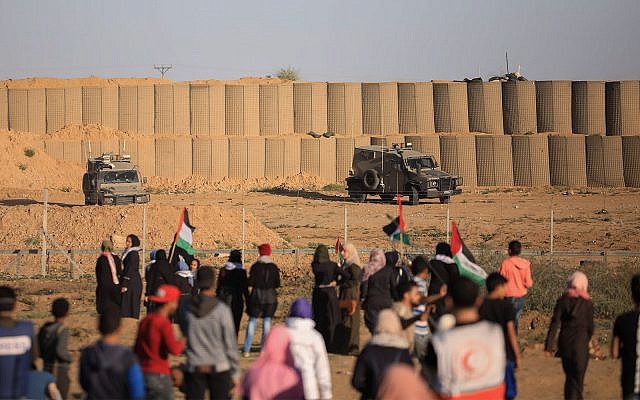 A Palestinian medic succumbed to wounds he sustained from a rubber bullet fired by Israeli security forces last month, during a weekly protest in the border region between Israel and the Gaza Strip, the Hamas-run Health Ministry said on Monday.

Thirty-six-year-old Mohammed al-Judeili, who worked for the Palestine Red Crescent Society, was hit by a rubber bullet in the face on Friday, May 3, while carrying out humanitarian work during a protest in the border area in northern Gaza, the ministry said in a statement.

An Israel Defense Forces spokeswoman said she could not immediately comment on the incident, but noted the army was looking into it.

Judeili was hit in the nose by the rubber bullet, which caused fractures in his skull, the Palestine Red Crescent said in a statement on its Facebook page.

He died at a hospital in Hebron, a large city in the West Bank, the Palestine Red Crescent stated, adding that his remains were being transferred back to Gaza for burial.

Videos posted on Twitter showed what appeared to be a motorcade of Palestine Red Crescent vans on their way to the Erez Crossing between Israel and Gaza.

Judeili, who was a father to four children, was a resident of the Bureij refugee camp in central Gaza, the official PA news site Wafa reported.

Since March 30, 2018, weekly Friday protests, which have included many violent acts, have taken place in the border region.

Their organizers have said the protests aim to achieve the return of Palestinian refugees and their descendants to lands that are now part of Israel, and pressure the Jewish state to lift its restrictions on the movement of people and goods into and out of the coastal enclave.

Israeli officials maintain that the return of Palestinian refugees and their descendants would destroy Israel’s Jewish character. They also contend that the restrictions on movement are in place to prevent Hamas and other terrorist groups from smuggling weapons into the Strip.

Israeli security officials have repeatedly called on Palestinians in Gaza to stay away from the border fence between Israel and the coastal enclave.

Both the Hamas-run Health Ministry and the Palestine Red Crescent did not say in their statements how far Judeili was from the fence when the rubber bullet impacted him.

Spokespersons for the ministry and the Palestine Red Crescent did not respond to phone calls.

Medics at the protests, however, have often approached the fence to help Palestinians wounded by Israeli fire.

Since the protests commenced, Israeli security forces have killed four Palestinian medical workers, according to the Gaza ministry.

Why Palestinian Terror Continues Outside the Temple Walls (Revelation 11)

The New Cold War with the Chinese Nuclear Horn (Daniel 7)

Khamenei’s Prayers Are About to be Heard (Revelation 18:10)