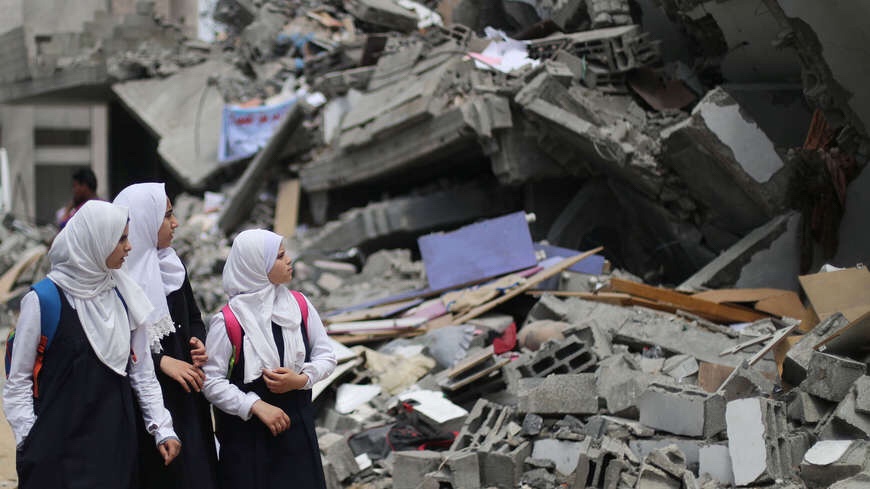 The most recent round of violence between Israel and the Gaza Strip on May 4 and 5 was more violent and deadlier than the ones before. For the first time in a long while, Israel’s military skipped directly to measures it usually reserves for more advanced stages of such fighting, killing Hamas targets and demolishing the organization’s command centers located in residential apartment buildings in Gaza. Hamas and the Islamic Jihad seem to have had the same idea of an advanced fighting stage. According to Arab media reports, the two groups tried to breach the defenses of Israel’s anti-missile Iron Dome batteries with heavy barrages designed to overwhelm the system’s interceptor rockets and improve the prospects of penetration. “Iron Dome’s success rate is still high,” an Israeli security source told Al-Monitor on condition of anonymity, “but when you let loose many missiles at once, naturally the numbers of non-intercepted missiles grow accordingly. It is still the same 8% [of non-intercepted missiles], but when 10 missiles penetrate the defenses, the effect is different than when two do.”

For Israel, this resulted in a grim toll: four civilian deaths and searing, incontrovertible proof that it cannot defend itself hermetically against a hail of rockets, anti-tank missiles and artillery shells, a further indication that the addiction to Iron Dome has some unhealthy aspects, as well.

Factors that accelerated the escalation were at play this time on both the Israeli and Gaza side. On the Israeli side, there is a new, energetic army chief, Lt. Gen. Aviv Kochavi, who appears to have had enough of the periodic rounds of fighting with Gaza occurring at shorter and shorter intervals. On the other side, the Islamic Jihad is becoming increasingly independent, shaking off all restraints, ruining Hamas plans and spoiling its parties. Members of the Israeli government’s security Cabinet say intelligence reports point to two possible motivations for this Islamist group’s decision. One is that the group is carrying out orders from Tehran, which is in desperate need of a violent clash between Israel and the Palestinians. The other, a security source said on condition of anonymity, is that the Islamic Jihad is simply a gang of “irresponsible, childish and violent people,” as its leaders were described in one intelligence report (reported here May 3).

Either way, everyone in Israel understands that the relatively short round that ended through Egyptian-Qatari mediation was only a teaser. Former Defense Minister Avigdor Liberman, who stepped down in November over what he described as Israeli inactivity vis-a-vis Gaza and because his demand for broad military action in the Strip was rejected, is warming up on the sidelines. Leaks by associates of the hawkish right-wing politician indicate that he has reached an understanding regarding Gaza with Prime Minister Benjamin Netanyahu, who is expected to appoint Liberman anew as defense minister in the fifth government Netanyahu is cobbling together. This cannot be good news for Hamas and the Islamic Jihad. Liberman is also counting on Kochavi; before Liberman quit as defense minister, he tagged Kochavi to become chief of the Israel Defense Forces (IDF) despite Netanyahu’s preference for another candidate, Maj. Gen. Eyal Zamir. Kochavi has already delivered a first installment. In the latest round with Gaza, Kochavi ordered the air force to bomb joint Hamas and Islamic Jihad command centers, some located in apartment buildings, and provided a sample of Israel’s capabilities in carrying out “targeted eliminations” of its enemies when it fired an airborne missile at a vehicle carrying Hamad Hudri, who served as Iran’s paymaster in Gaza before he was killed.

The IDF denies that Kochavi is changing the policy adopted by his predecessor Gadi Eizenkot, who worked hard to prevent escalations that could lead to yet another pointless war with Gaza. Military officials say the reason for the apparent shift is far simpler. The attacks against Hamas and Islamic Jihad infrastructure have played themselves out and are no longer effective. There are no more valuable targets for Israel to strike and with which to exact a heavy price from the terror organizations. The IDF escalated its response to the attacks from Gaza in this past round because it had no other choice.

There remains the question of the goal. No one in Israel is fooling themselves into thinking that even with its stepped-up measures, Israel had restored its deterrence vis-a-vis Gaza and that calm would return to the Strip and its surroundings. Senior Israeli military officials were quoted last week warning that unless significant measures are adopted to alleviate the humanitarian and economic crisis in Gaza, renewed violence is only a matter of time. Israel’s security Cabinet, which has long served as a rubber stamp for Netanyahu’s one-man rule, was quick to hit back at the unnamed officers. No winners emerged from this clash, either. It, too, probably foreshadows things to come.

The one bright spot is Qatar. The oil and gas principality has been engaged in a complex love-hate relationship with Israel in recent years. On the one hand, Qatar is closely aligned with various terrorist groups, funding militias and stirring up incitement through its very own Al Jazeera network. On the other hand, it has served as a significant moderating factor using its financial resources to ease tensions. At the end of the flare-up, Qatar announced it would give the Palestinians nearly half a billion dollars in aid. This is supposed to throw Hamas a lifeline. The money is not destined only for Gaza, on the contrary: Most of it [$300 million] will go to Palestinian President head Mahmoud Abbas, whose fiefdom is also experiencing rapid economic deterioration (as reported here in the past).

According to senior Israeli sources, unlike previous times, this time the Qataris are willing to accept close and significant monitoring of the funds reaching Gaza, including Israeli oversight. This increases the prospects of funds reaching needy individuals and alleviating the deep crisis in the enclave — rather than being diverted to the terrorist organizations operating there. This is not enough, Israeli military sources say, but for the time being, it will have to do.

All eyes are now on the drama playing out between Tehran and Washington — including Iran’s announcement this week over uranium enrichment — which also involves Hezbollah chief Hassan Nasrallah, Syrian President Bashar al-Assad, Turkish President Recep Tayyip Erdogan and many others. Netanyahu is far more invested in this front; the southern one interests him a lot less. He views the obstruction of Iran’s nuclear capability as a historic task of biblical dimensions, regarding the terrorist groups in Gaza as nothing more than annoying background noise of limited threat potential.

However, others think differently. Newly sworn-in Blue and White Knesset member Zvi Hauzer, formerly Netanyahu’s Cabinet secretary (2009-13), is waging a campaign to demilitarize Gaza. Hauzer believes that those who dismiss Hamas will get Hezbollah instead. After all, that is exactly what happened to Israel in Lebanon. “Just as the international community, along with a real military threat, forced Assad to give up his chemical weapons, the same should be done with Gaza,” he told Al-Monitor. “Hamas and Jihad have to understand that they are risking their hold on power and their lives if they continue firing rockets at Israel. Once they realize this, we will see a convoy of thousands of rockets and missiles transported from the Strip southward toward Egypt. Until then, the violence will continue.”