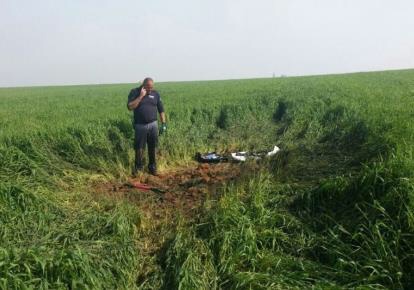 The Red Alert incoming rocket siren was not activated and according to the IDF Spokesperson’s Unit one projectile landed in the Hamas-run coastal enclave.

On Friday, the IDF struck Hamas positions in the Strip after a gunshot was fired at IDF troops deployed along the Gaza border east of the city of Deir al-Balah during weekly border riots.

“An IDF aircraft and tank attacked two military positions belonging to the Hamas terror group in the Gaza Strip in response to a shot that was fired a short time ago at troops near the security fence,” the IDF Spokesperson’s Unit said in a statement.

Local reports put the number of demonstrators as 6,000 Palestinians in five main spots along the fence with Israel, with some rioting along the border, throwing rocks and explosive devices.

According to the Palestinian Ministry of Health 46 people were injured in the clashes with IDF troops who were responding to the violent protests with riot dispersal means.

With a tense calm holding, there have been no deaths in the past two weeks during the border clashes which has seen over 200 Palestinians killed by IDF fire.

The border protests began on March 30th and has seen over half a million people violently demonstrating along the security fence with Israel demanding an end to the 12-year long blockade, congregating at points along the border range between several thousand to 45,000 each day.

Meanwhile in the West Bank, border police officers thwarted a possible stabbing attack by a 20 year-old Palestinian from the village of Sanniriya at the Tapuach junction in the West Bank on Saturday.

According to a statement released by the Police the man raised the suspicion of border police officers after he arrived at a checkpoint south of Nablus and when he was approached by the officers he fled.

One officer blocked the man’s way with a car, he pulled out a knife and attempted to open the vehicle’s door to stab him. The officer shot the suspect, seriously wounding him.

The Palestinian was evacuated to Beilinson hospital for medical treatment. There were no other injuries.

The West Bank and Gaza Strip are currently under a  week-long closure for the Jewish holiday of Passover.

The military announced on Thursday that following an assessment of the current security situation, all crossing to the West Bank and Gaza will be closed to Palestinians between Friday April 19 and will last until Saturday April 27th at midnight with the exception of humanitarian, medical and exceptional cases approved by the IDF’s Coordinator of Government Activities in the territories (COGAT).

Security forces regularly step up their preparedness prior to the holidays, regularly imposing closure on the West Bank in anticipation of an uptick in tensions and violence.