The Israel Defense Forces wrapped up a major snap drill on Tuesday simulating a future war in the Gaza Strip.

The military said the three-day exercise included troops from numerous branches of the armed forces, including from infantry units, the Armored Corps and the Israel Air Force. They drilled rapid deployment, live-fire, combined air-ground fighting, maneuvering and providing combat and administrative assistance.

Soldiers also practiced urban warfare techniques, fighting at night and on vehicles such as tanks and armored personnel carries, according to the IDF, which said the exercise took place at the Tzeelim training base in southern Israel

“The multi-branch drill was meant to test the capabilities and operational readiness of the forces for a campaign in the Gaza Strip,” a statement from the military said.

IDF Chief of Staff Aviv Kohavi joined the drill on Tuesday and afterwards spoke with soldiers and senior officers who took part.

Though a surprise announcement, the military said on Sunday the exercise had been planned in advance as part of its training schedule. 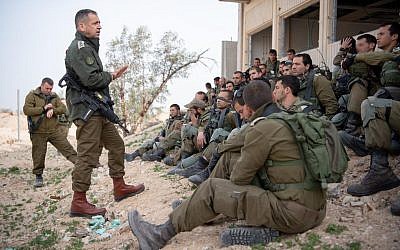 Recent weeks have seen a dramatic increase in the level of violence along the Gaza border, with near nightly riots and a return of airborne arson attacks, which had waned in light of a de facto ceasefire agreement between Israel and the Gaza-ruling Hamas terror group.

The exercise also came amid growing concerns in the military concerning its readiness for war in light of allegations by former military ombudsman Maj. Gen. (res.) Yitzhak Brick that the army, especially its ground troops, were not prepared for a large-scale war.

Last week, the army also tested its automated system for calling up reservists in what it said was a planned exercise aimed at improving preparedness.