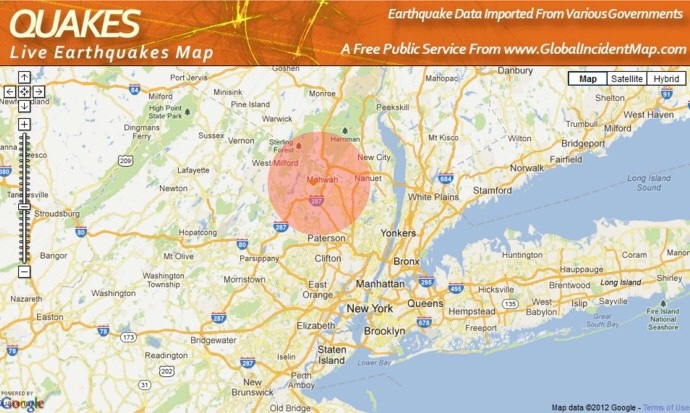 A Look at the Tri-State’s Active Fault Line

The Ramapo Fault is the longest fault in the Northeast that occasionally makes local headlines when minor tremors cause rock the Tri-State region. It begins in Pennsylvania, crosses the Delaware River and continues through Hunterdon, Somerset, Morris, Passaic and Bergen counties before crossing the Hudson River near Indian Point nuclear facility.

But the New Jersey-New York region is relatively seismically stable according to Dr. Dave Robinson, Professor of Geography at Rutgers. Although it does have activity.

“There is occasional seismic activity in New Jersey,” said Robinson. “There have been a few quakes locally that have been felt and done a little bit of damage over the time since colonial settlement — some chimneys knocked down in Manhattan with a quake back in the 18th century, but nothing of a significant magnitude.”

Robinson said the Ramapo has on occasion registered a measurable quake but has not caused damage: “The Ramapo fault is associated with geological activities back 200 million years ago, but it’s still a little creaky now and again,” he said.

“More recently, in the 1970s and early 1980s, earthquake risk along the Ramapo Fault received attention because of its proximity to Indian Point,” according to the New Jersey Geological Survey website.

Historically, critics of the Indian Point Nuclear facility in Westchester County, New York, did cite its proximity to the Ramapo fault line as a significant risk.

In 1884, according to the New Jersey Geological Survey website, the  Rampao Fault was blamed for a 5.5 quake that toppled chimneys in New York City and New Jersey that was felt from Maine to Virginia.

“Subsequent investigations have shown the 1884 Earthquake epicenter was actually located in Brooklyn, New York, at least 25 miles from the Ramapo Fault,” according to the New Jersey Geological Survey website.