Damaging earthquakes have occurred in New York and surely will again. The likelihood of a damaging earthquake in New York is small overall but the possibility is higher in the northern part of the state and in the New York City region.Significant earthquakes, both located in Rockaway and larger than magnitude 5, shook New York City in 1737 and 1884. The quakes were 147 years apart and the most recent was 122 year ago. It is likely that another earthquake of the same size will occur in that area in the next 25 to 50 years. A magnitude 5.8 earthquake in New York City would probably not cause great loss of life. However the damage to infrastructure – buildings, steam and gas lines, water mains, electric and fiber optic cable – could be extensive.

Acceleration of the ground during an earthquake is more important than total movement in causing structural damage. This map shows the two-percent probability of the occurrence of an earthquake that exceeds the acceleration of earth’s gravity by a certain percentage in the next fifty years.

If a person stands on a rug and the rug pulled slowly, the person will maintain balance and will not fall. But if the rug is jerked quickly, the person will topple. The same principle is true for building damage during an earthquake. Structural damage is caused more by the acceleration of the ground than by the distance the ground moves.

Palestinians have paid a great price for their call for life with dignity during mass protests held along Gaza’s boundary with Israel over the past eight months.

Some 180 Palestinians have been shot dead by Israeli occupation forces and nearly 6,000 others injured by live fire during the Great March of Return.

“The vast majority of casualties were unarmed, and were fatally shot from a distance while in the Gaza Strip itself,” according to a new report by the Israeli group B’Tselem, confirming previous findings by other rights organizations.

“As a general rule, the protectively clad troops sniping at them from other side of the fence were not in any real danger,” B’Tselem added.

In addition to injuries by live fire, 2,000 cases of injury by tear gas inhalation have been recorded, along with hundreds of injuries by rubber-coated metal bullets.

Injuries to 90 protesters – 17 of them children – have resulted in amputation, nearly all of the lower limbs.

Altogether, a staggering 24,000 Palestinians have been injured during the Great March of Return protests – more than one percent of the territory’s population.

Around half of those injured were treated at field clinics at protest sites. The rest were transferred to hospital for treatment.

“The mass influx of casualties has disrupted an already fragile health system,” according to the World Health Organization. “In the hospitals, trauma patients are prematurely discharged to make room for new patients.”

B’Tselem surveyed more than 400 protesters who were wounded by live fire, including 63 children.

The vast majority – 85 percent – were shot in their lower limbs.

Nearly all of the protesters wounded by live fire surveyed by B’Tselem require prolonged, medical treatment. More than half require rehabilitation and physical therapy. Ten percent are permanently injured.

Being shot by occupation forces is only “the first chapter in a prolonged ordeal,” according to B’Tselem.

“Even a superbly functioning healthcare system would be sorely tried when faced with such a large number of casualties,” the group states.

“Yet in Gaza, even before the protests began, the healthcare system was already on the brink of collapse.”

The dire state of Gaza’s healthcare system is a result of the 11-year Israeli blockade at the center of the protests that have met with brutal violence.

At the beginning of the month, Gaza’s central pharmacy “was completely out of 226 essential drugs, and had only a one-month supply left of another 241,” B’Tselem states.

Stocks of more than 250 types of medical disposables had been depleted.

“The blockade places restrictions on replacing worn-out, broken medical equipment, on importing advanced medical equipment and drugs, and on travel by physicians for professional training outside Gaza,” according to B’Tselem.

Israel meanwhile denies or delays permission to medical patients to travel outside Gaza via Erez checkpoint for treatment unavailable in the besieged territory.

Others have been referred to hospitals in Egypt but cannot afford the treatment.

Gaza’s sole prosthetic limbs workshop “can provide only the most basic prosthetic legs with limited range of motion,” according to a recent media report.

The cost of going abroad for prosthetic limbs is prohibitive in impoverished Gaza where the blockade has pushed unemployment rates to over 50 percent.

In addition to physical harm, Israel’s crackdown on the protests has increased symptoms of post-traumatic stress in children who find themselves reliving trauma from previous military assaults on Gaza.

“The high number of casualties at the protests is not an unavoidable fact of life,” B’Tselem states.

“It is the result of a deliberate policy by the Israeli security establishment.”

“Manifestly unlawful” open fire orders “permit the use of live fire against unarmed protestors who pose no danger to anyone and are on the other side of the fence, inside the Gaza Strip.”

Israeli forces have shot bystanders standing hundreds of meters away while “doing nothing to jeopardize the troops,” as stated by B’Tselem.

These open fire orders – kept secret by the state – have been rubber-stamped by Israel’s high court.

A lower court recently ruled that Palestinians in Gaza are not entitled to seek compensation for damages from Israel because the state has declared the territory an “enemy entity.”

That was the argument made by the court as it rejected a case filed on behalf of a boy in Gaza who was left quadriplegic after Israeli forces opened fire on him in November 2014.

With the court upholding a 2012 law barring residents of an “enemy entity” from receiving compensation, all Palestinians in Gaza “are now banned from redress and remedy in Israel, regardless of the circumstances and the severity of the injury or damages claimed,” according to the rights groups Al Mezan and Adalah.

The new law “introduced criteria that are nearly impossible to meet for victims from Gaza,” leaving Palestinians in Gaza who suffered injury or damage during military operations ineligible to seek compensation. A narrow window of time in which Gaza residents initiate claims in Israel – at significant financial cost – and other restraints effectively bar anyone there from seeking justice.

But even in the case of the child represented by Adalah and Al Mezan, “who was shot in the absence of military activity and his family complied with all of the … stringent criteria,” the state argued that the boy was ineligible for compensation with “the simple justification that he is a resident of Gaza.”

According to the rights groups, “With this message, Israel declared that it absolves itself from the responsibilities, as a state, to investigate, deter, and take responsibility for violations by its armed and security forces.”

The ruling “grants comprehensive immunity to the Israeli military and the state for illegal, reprehensible, and even criminal actions” in the occupied West Bank and Gaza.

With no way to fulfill their right to effective legal remedy from Israel, the occupying power, “the only legal options currently available to Palestinians in Gaza are limited to international judicial mechanisms,” Adalah and Al Mezan state.

The International Criminal Court’s chief prosecutor has warned Israeli leaders that the shooting of unarmed Palestinians along the Gaza boundary could be considered a crime under international law within the court’s jurisdiction.

Palestinian and international nongovernmental organizations have called on the International Criminal Court to “urgently” open an investigation into alleged Israeli war crimes.

The situation in Palestine has been under preliminary examination by the prosecutor’s office since 2015. 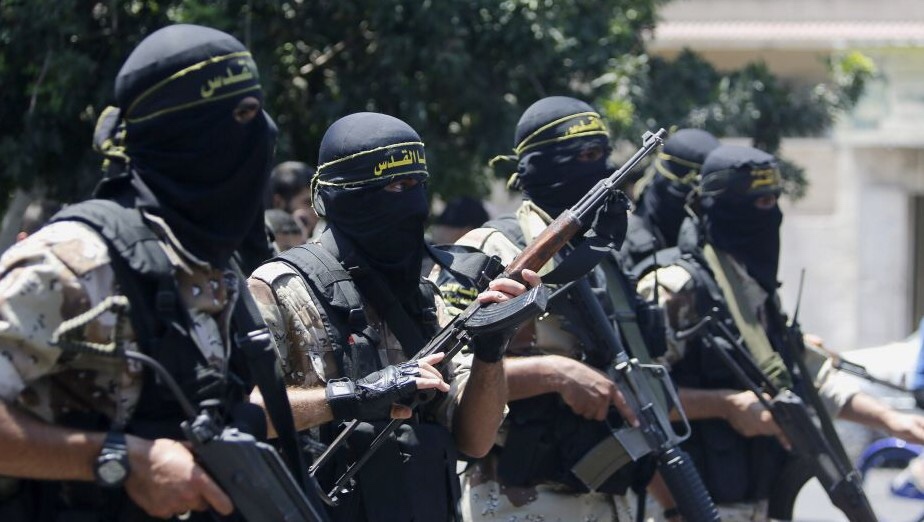 Gaza Imam Ahmad Okasha: Jihad in Palestine – the most obvious jihad on the face of the earth

Gaza Imam Ahmad Okasha said that the Jihad in Palestine is the most obvious Jihad on the face of the Earth. He quoted a hadith about the Muslims killing the Jews before Judgement Day and said that there could be no doubt about Jihad when Muslim are fighting Jews who have occupied their land.

Sadr described his talks with Barzani as “important and historic,” stressing that they are the beginning of a “new and positive approach on the political process in Iraq.”

He also hoped that Barzani’s visits to Baghdad and al-Najaf will close the chapter on the mistakes of the past and help pave the way for a new government.

The two sides agreed that a new opportunity is available for Erbil and Baghdad and they should both work on building trust and resolving disputes between them, said Sadr’s website.

He was warmly received at the airport by parliament Speaker Mohammed al-Halbousi and head of the Fateh alliance Hadi al-Ameri. He then held talks with Abdul Mahdi and concluded the trip with dinner with former Prime Minister Nouri al-Maliki.

A senior Iraqi official told Asharq Al-Awsat that Barzani’s reception in Baghdad was different than the one shown to his nephew, Prime Minister Nechirvan Barzani, when he last visited the Iraqi capital.

Masoud Barzani was more warmly welcomed “because he has listened to international advice that said there can be no solution without reaching an understanding with Baghdad based on partnership and agreement on issues of contention.”

Head of the Kurdistan Democratic Party bloc at the Iraqi parliament Fiyan Sabri described to Asharq Al-Awsat that Barzani’s visit to Baghdad as “positive.”

She noted that it took place at a sensitive time in which the new Iraqi government was still being formed. The trip is an implicit show of support to Abdul Mahdi in his mission to form a new cabinet.

In addition, it was an opportunity to give all Iraqi political forces the chance to overlook the mistakes of the past and move forward towards new partnership, she explained.

“Masoud Barzani is a man of peace and a national leader. He is capable of bringing together all political forces and his visit to each of Baghdad and Najaf is a good sign,” she remarked.

Turkmen forces were not so optimistic, instead voicing concerns that Barzani’s visit would lead to agreements at their expense, even though he had also held talks during his trip with head of the Turkmen Front Arshad al-Salehi

With INS Arihant Nuclear Submarine completing a patrol in the Indian Ocean recently, experts believe that this development that has the potential to escalate the nuclear arms race between India and Pakistan. EurAsian Times analyses how INS Arihant can be detrimental to Pakistan and counter-challenge China in the region.

Contrary to conventional submarines, which run on diesel or electricity, nuclear-powered submarines like INS Arihant do not need to surface frequently, can operate for long periods of time underwater, and remain undetected.

“The development marks the first actual deployment of ready-to-fire nuclear warheads in South Asia which is a matter of concern not only for the Indian Ocean littoral states but also for the international community at large,” Pakistan Foreign Ministry spokesman said in his weekly news briefing, state-owned Radio Pakistan reported.

“India feels jittery against China and to an extent Pakistan. It is, on the one hand, trying to match Beijing’s defence capability, while on the other it wants to prove to the world that it is a robust nuclear power in the region,” the experts stated

Samar Mubarik, a Pakistani nuclear scientist who led the team that conducted six successful nuclear tests in May 1998, claims that Islamabad already possesses a “more effective and better” nuclear-powered submarine technology developed in 2017.

“The U.S. is supporting India in its nuclear pursuance to challenge China, while China wants to see Pakistan as strong in terms of nuclear capability to counter India. “China knows that the U.S. is pushing India against it in the region. So in case of any misadventure against Pakistan, Beijing would stand with Islamabad,”