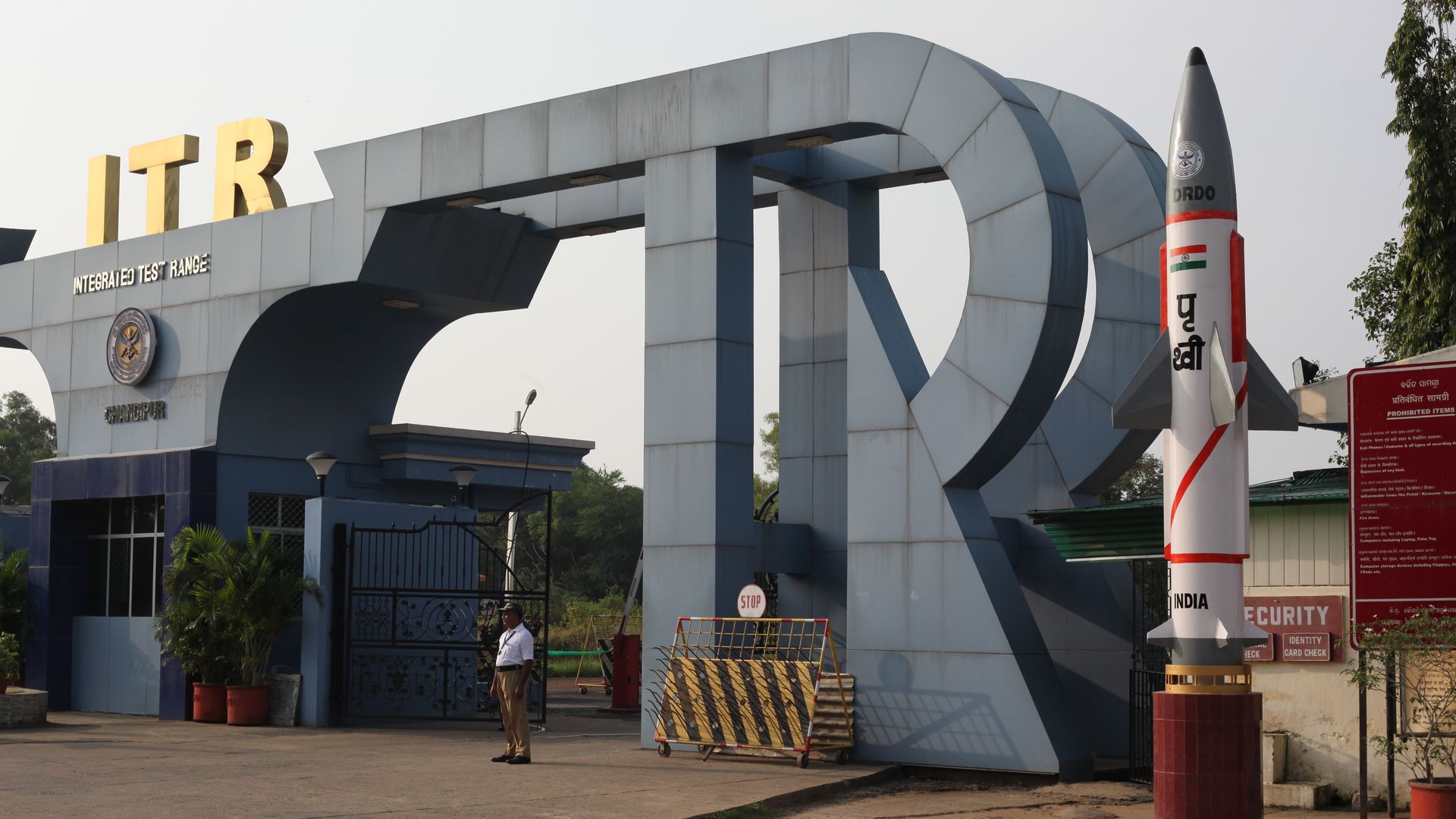 An entrance to one of India’s missile test ranges. Photo: Pallava Bagla/Corbis via Getty Images

For all the attention North Korea is getting, there’s a web of nuclear threats around the world that risk setting off an arms race all on their own — even if the North Korean threat goes away.

The big picture: It’s worth taking the time to focus on the other standoffs. Heightened risk is not a certainty that nuclear conflict breaks out, but the web is tangled enough that a spark of conflict could have wide-ranging global consequences.

Iran began increasing its uranium enrichment following the U.S. withdrawal from the nuclear deal, and it may not remain in the deal with other countries much longer. Most of the incentive to remain in the deal came from economic benefits of doing business with the United States — and Europe alone will have trouble enticing Iran to stay in the deal.

The Saudis have said they would consider making nuclear weapons if Iran restarts its nuclear weapons program. And Saudi Arabia has been seeking U.S. help in starting a nuclear program, even though Riyadh hasn’t accepted terms of uranium enrichment that would prevent the program from escalating beyond peaceful aims. Israel has gotten involved in the conversation in an attempt to prevent a potential arms race in the region.

Its nuclear policy states that it would only use nuclear weapons in response to an attack — but analysts close to the Chinese government fear that the U.S. National Security Strategy and Nuclear Posture Review frame China as a potential target for the U.S. as a primary rival on the world stage. And China has been working to catch up to the U.S. in the meantime.

These three countries never signed the nuclear Nonproliferation Treaty (NPT), which was drawn up as a way to stop the spread of nuclear weapons. And they each have nuclear arsenals.

A few other powers…

Countries that had nuclear weapons/programs

Iraqi Shiite cleric Muqtada al-Sadr’s rise to power has not yet reached its zenith. The May 18 Iraqi parliamentary election, in which his Sairun political block won a plurality, has elevated him to the position of de facto leader of the Iraqi nation. Mr. al-Sadr won’t become prime minister because he didn’t run for a parliamentary seat, but he will control the formation of the next Iraqi government.

Since the U.S. invasion of Iraq in 2003, Mr. al-Sadr has been a sidebar to the main stories, making harsh anti-American statements and leading (from a safe distance) Shiite militia forces that fought repeatedly with U.S. troops. At times he appears (incorrectly) to be a mere tool of Iran, but at others his hazy commitment to Iraqi nationalism takes over from whatever loyalty his mind harbors to Iran.

Whatever else he is, Mr. al-Sadr is a complex man whose violent and virulently anti-American track record is worth examination in order to project Iraq’s short-term future.

Mr. al-Sadr first gained notoriety because of his involvement in the April 2003 murder of rival Shiite cleric Sayyid al-Khoei. Mr. al-Khoei was hacked to death by a mob allegedly under the orders of Mr. al-Sadr. An arrest warrant for Mr. al-Sadr was issued by an Iraqi judge a year later, but he was never arrested far less tried for the murder because, as one of the leaders of Iraq’s Shiite majority, he is above the law.

As our nation-building strategy dissolved into failure in Iraq, Mr. al-Sadr’s militias, generally known as the Mahdi Army, became the greatest threat to our troops in 2006-07. Fearing possible U.S. action against him, Mr. al-Sadr fled to Iran in 2007 purportedly to study to become an ayatollah.

Since his 2011 return, Mr. al-Sadr has often proved himself able to mobilize much of the Shiite population especially among the three-and-a-half-million residents of the slums of Sadr City on the outskirts of Baghdad. Sairun’s campaign promised relief to the poor and a fight against government corruption.

Mr. al-Sadr’s followers in Sadr City and elsewhere are his co-religionists, sufficient in number to assure his continued rise.

Mr. al-Sadr’s father, also a Shiite cleric, was reportedly murdered by Saddam Hussein’s thugs for his opposition to Saddam’s regime. The younger al-Sadr’s four-year stay in Iran, the epicenter of Shiite Islam was — as his followers said — primarily for religious study. But it was also a political act.

Mr. al-Sadr’s wishes to eventually replace Iraq’s most senior Shiite cleric, Grand Ayatollah Ali al-Sistani, who is now 88 years old and one of the most revered ayatollahs in Shia Islam. Mr. al-Sistani refused to speak with U.S. officials, including proconsul Jerry Bremer when, after the U.S. invasion, they were trying to form an interim government, and thereafter.

Mr. al-Sadr, who is only 44 years old, evidently covets Mr. al-Sistani’s position but is too young to replace him even in the event of his death.

Some pundits are promoting Mr. al-Sadr as a unifying force in Iraq opposed to Iranian influence. To say that is akin to saying Iran will be a unifying force for peace in the Middle East. Sairun is more like Hezbollah in Lebanon: A terrorist movement trying to appear to be a political party. Mr. al-Sadr renamed the Mahdi Army as “peace companies” in time for the election.

Though he may be skeptical of Iran’s influence in Iraq, Mr. al-Sadr’s militias have been oriented toward support of Iran and have been supported for years by Iran.

In truth, Iraq is no longer a nation. It is divided among the Kurdish area in the north, the Sunni center and the Shiite-dominated Sadr City near Baghdad and to the south. The government — before the election — was headed by Prime Minister Haider al-Abadi, whose party finished third in the May election. Mr. al-Abadi’s government tried to rule all three sections, attempting, for example, to control a portion of Kurdish oil exports. It failed.

At this point there is no government that can unify Iraq. Any attempt by Mr. al-Sadr to form an Iraqi unity government would have to grant independent powers to the Kurdish north which jealously guards its autonomy and control of oil resources. It would similarly have to accommodate Mr. al-Abadi’s party in the Sunni regions around Baghdad and deliver on his promises to the poor in Sadr City and beyond.

That sort of coalition-building is probably beyond Mr. al-Sadr’s skill and influence. He launched a trial balloon by hinting that he may support Mr. al-Abadi for prime minister, but after campaigning hotly against government corruption, that can only work if Mr. al-Abadi is willing to surrender control to Mr. al-Sadr.

All the participants in such a government (with the exception of the Kurds, who are fighting the Turks) are strongly influenced by Iran, which is trying to make Iraq its satrapy. Iran’s influence on Mr. al-Sadr cannot be affected by outsiders — especially the U.S., which he despises — but will be determinative of the success he has in forming a government as well as its longevity.

Any Iraqi government controlled by Mr. al-Sadr or Iran will be our enemy and — with financial and other outside aid — a sanctuary for various terrorist networks. The only question that remains is, which ones?

• Jed Babbin, a deputy undersecretary of defense in the George H.W. Bush administration, is the author of “In the Words of Our Enemies.”

A Look at the Tri-State’s Active Fault Line

The Ramapo Fault is the longest fault in the Northeast that occasionally makes local headlines when minor tremors cause rock the Tri-State region. It begins in Pennsylvania, crosses the Delaware River and continues through Hunterdon, Somerset, Morris, Passaic and Bergen counties before crossing the Hudson River near Indian Point nuclear facility.

But the New Jersey-New York region is relatively seismically stable according to Dr. Dave Robinson, Professor of Geography at Rutgers. Although it does have activity.

“There is occasional seismic activity in New Jersey,” said Robinson. “There have been a few quakes locally that have been felt and done a little bit of damage over the time since colonial settlement — some chimneys knocked down in Manhattan with a quake back in the 18th century, but nothing of a significant magnitude.”

Robinson said the Ramapo has on occasion registered a measurable quake but has not caused damage: “The Ramapo fault is associated with geological activities back 200 million years ago, but it’s still a little creaky now and again,” he said.

“More recently, in the 1970s and early 1980s, earthquake risk along the Ramapo Fault received attention because of its proximity to Indian Point,” according to the New Jersey Geological Survey website.

Historically, critics of the Indian Point Nuclear facility in Westchester County, New York, did cite its proximity to the Ramapo fault line as a significant risk.

In 1884, according to the New Jersey Geological Survey website, the  Rampao Fault was blamed for a 5.5 quake that toppled chimneys in New York City and New Jersey that was felt from Maine to Virginia.

“Subsequent investigations have shown the 1884 Earthquake epicenter was actually located in Brooklyn, New York, at least 25 miles from the Ramapo Fault,” according to the New Jersey Geological Survey website. 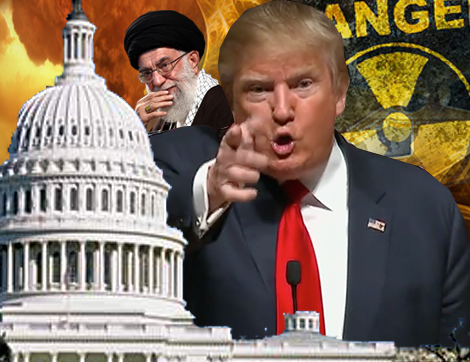 Defense Minister Avigdor Liberman hopes the framework for North Korean denuclearization being set by US President Donald Trump will also be applied to Iran’s nuclear program, he said Sunday.

“I wish that the model of total [North] Korean abandonment of its nuclear program could be realized in the case of Iran as well,” Liberman said in an interview with Army Radio. “We saw the opposite – Ayatollah Khamenei’s announcement that he has ordered the acceleration his country’s nuclear program.”

Meanwhile, US Secretary of State Mike Pompeo tweeted last week that he was “following reports that Iran is planning to expand its uranium enrichment capabilities,” adding that “the United States will not allow Iran to develop nuclear weapons.”

Pompeo’s comments came after Iran’s nuclear chief Ali Akbar Salehi threatened that next month a nuclear plant for the construction of advanced centrifuges in Natanz, Iran, would be completed. Salhi said on local television that “Following the order from Supreme Leader Ayatollah Khamenei, we prepared the place within 48 hours.”

“Iran is aware of our determination,” he said.

© Sabah Arar, AFP | A fire truck arriving at the scene of a blaze at Iraq’s biggest ballot warehouse, where votes for the eastern Baghdad district were stored, in the centre of the capital Baghdad on June 10.

A storage site in Baghdad housing ballot boxes from Iraq’s May parliamentary election has caught fire and first responders are attempting to control it, a local official and the interior ministry said on Sunday.

The ballot boxes are part of a manual recount of votes from the May election, mandated in a law passed by the Iraqi parliament on Wednesday, a day after Prime Minister Haider al-Abadi, who’s bloc came third in the election, said there had been serious violations and that most of the blame lay with the elections commission.

“The storage spaces housing all the ballot boxes from al-Rusafa belonging to the election commission are now on fire,” said Baghdad province council member Mohamed al-Rabeei. “Civil defence forces are on the way but I can tell you all the boxes and papers have burned.”

Rusafa is a district of Baghdad on the eastern side of the river Tigris. An interior ministry spokesman said the fire had destroyed some documents and equipment but civil defence forces were trying to prevent it from spreading to ballot boxes.

The recount could undermine nationalist cleric Moqtada al-Sadr, a long-time adversary of the United States who also opposes Iran’s sway in Iraq and who’s bloc won the largest amount of seats in the election. One of Sadr’s top aides expressed concerns that some parties were trying to sabotage the cleric’s victory.