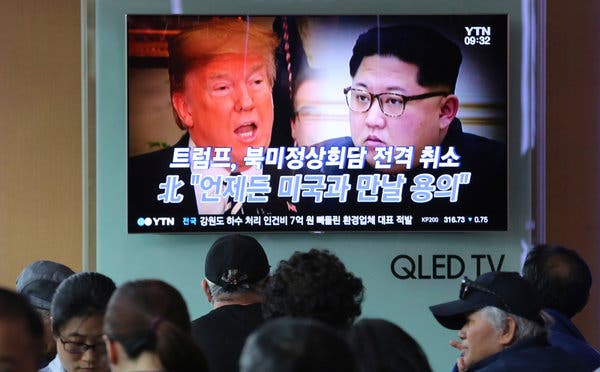 The State Department said earlier that a team was in Panmunjom, which straddles the border inside the demilitarized zone, or DMZ, separating the North and South Korea. One can cross the border simply by stepping across a painted line, but moving beyond several footsteps into the North at Panmunjom would be rare for U.S. officials.

Trump withdrew from a planned June 12 Singapore summit with Kim last Thursday, but quickly announced that it could get back on track. His tweet Sunday, which offered praise for the longtime U.S. adversary, was the latest signal that his concerns about the North’s stance toward the summit had been allayed.

“Our United States team has arrived in North Korea to make arrangements for the Summit between Kim Jong Un and myself,” he tweeted. “I truly believe North Korea has brilliant potential and will be a great economic and financial Nation one day. Kim Jong Un agrees with me on this. It will happen!”

South Korea’s president, Moon Jae-in, on Sunday described his surprise meeting the day before with Kim in the Panmunjom truce village, saying Kim had committed to sitting down with Trump and to a “complete denuclearization of the Korean Peninsula.”

U.S. Secretary of State Mike Pompeo tapped veteran American diplomat Sung Kim to handle pre-summit negotiations. On a separate but complementary track was the CIA team Pompeo set up last year when he headed the spy agency. And on a third track was a White House logistical group sent to Singapore on Sunday to prepare in case the summit takes place. It was led by Joe Hagin, White House deputy chief of staff for operations.

Moon has insisted Kim can be persuaded to abandon his nuclear facilities, materials and bombs in a verifiable and irreversible way in exchange for credible security and economic guarantees. Moon said Sunday that the North’s disarmament could still be a difficult process even if Pyongyang, Washington and Seoul don’t differ over what “complete denuclearization” of the peninsula means.