Nuclear arms: We must reverse the direction of the Doomsday Clock

Atomic scientists recently announced that it’s 2 minutes to midnight. For them, the world security situation is more dangerous than it was a year ago — and as dangerous as it has been since World War II.

The Doomsday Clock was created in 1947 by scientists for the Bulletin of Atomic Scientists, and uses the imagery of apocalypse (midnight) and the contemporary idiom of nuclear explosion (countdown to zero) to convey threats to humanity and the planet.

Last week the Pentagon released a new nuclear arms policy, effectively ending the Obama-era efforts to reduce the size and scope of the U.S. arsenal and minimize the role of nuclear weapons. The former president called it a moral obligation to lead by example.

During his first State of the Union address, President Donald Trump vowed to build a nuclear arsenal “so strong and powerful that it will deter any acts of aggression.”

The issue of nuclear arms became more real for Hamline students who studied abroad this January in Nagasaki, St. Paul’s sister city. One student remarked, “It is hard to understand the pain when only looking at numbers, but when you see the pictures and hear the stories of survivors, the people affected are not just statistics.”

The course included visits to Ground Zero, the Atomic Bomb Museum, the National Peace Memorial, and seeing “Constellation Earth,” the Paul Granlund sculpture donated by the citizens of St. Paul for the Nagasaki Peace Park. They heard the leader of the International Campaign to Abolish Nuclear Weapons (ICAN), this year’s Nobel Peace Prize recipient. Most moving were the stories of the hibakusha, survivors of the atomic bomb.

With the minute hand ticking, designing strategies and creating action plans was essential. Working in team, Japanese and Hamline University students developed and presented their plans. Their recommended action included:

Improving education was a central theme and a key to action. At early age information about the effects of nuclear weapons need to be available. A Hamline student has a goal to write a 16-week curriculum for children.
International cooperation among nations, including the United States signing the U.N. treaty on nuclear arms.
The collection of signatures for a petition circulated by Mayors for Peace to support the treaty to ban nuclear weapons.
Starting a tradition in St. Paul of ringing bells at 11:02 a.m. on Aug. 9 each year.
We must reverse the direction of the Doomsday Clock. A Hamline student declared, “I am absolutely convinced that getting rid of all nuclear weapons will be the most important work of our time.” Collectively we must declare, “No more hibakusha”!

Jim Scheibel, a former mayor of St. Paul, is Professor of Practice in the Management, Marketing and Public Administration Department, Hamline University. He is a former director of both AmeriCorps VISTA and the Senior Corps.

Won-Young Kim, who runs the seismographic network for the Northeast at Columbia University’s Lamont-Doherty Earth Observatory, said the city is well overdue for a big earthquake.

The last big quake to hit New York City was a 5.3-magnitude tremor in 1884 that happened at sea in between Brooklyn and Sandy Hook. While no one was killed, buildings were damaged.

Kim said the city is likely to experience a big earthquake every 100 years or so.

“It can happen anytime soon,” Kim said. “We can expect it any minute, we just don’t know when and where.”

New York has never experienced a magnitude 6 or 7 earthquake, which are the most dangerous. But magnitude 5 quakes could topple brick buildings and chimneys.

“Today, with so many more buildings and people … we’d see billions in damage,” Armbruster said. “People would probably be killed.”

This week’s 2.2-magnitude earthquake that shook parts of northern Westchester and Putnam Counties is another reminder that the Indian Point nuclear plant remains a danger to the region.

Indian Point sits just one mile south of the Stamford-Peekskill line, part of the Ramapo Fault Zone. Researchers at Columbia University’s Lamont-Doherty Earth Observatory say that this fault zone can produce at least a magnitude 6, and perhaps a magnitude 7 earthquake. The earthquake’s epicenter, in Yorktown, is near the Stamford-Peekskill line and about 8 miles east of Indian Point.

While the recent earthquake was not enough to disrupt operations at the plant, it reminds us that the plant’s proximity to known faults puts the plant at a greater risk. In fact, in 2011 the Nuclear Regulatory Commission has ranked Indian Point’s Unit 3 reactor the highest in risk of failure from earthquakes among all U.S. nuclear power plants.

At the typical U.S. nuclear reactor, there’s a 1-in-74,176 chance each year that the core could be damaged from the effects of an earthquake (the effects of a secondary event, such as a tsunami are not calculated). Designed to withstand a magnitude 6.1 earthquake, the chance of core damage from a quake at Indian Point 3 is calculated to be 1 in 10,000 each year. And according to NRC specifications, that’s dangling on the edge of what it deems “immediate concern regarding adequate protection” of the public. (The Indian Point Unit 2 reactor is rated the 25th most susceptible to the effects of a significant earthquake with a 1 in 30,303 chance each year.)

Columbia University has identified the risk of a 7 magnitude earthquake in the region. Even the NRC believes core damage is seven times more likely than at most reactors, but held off requiring higher post-Fukushima standards to be met at Indian Point. So far we got lucky that no big earthquakes have hit. We can’t get lucky forever, so it’s lucky we got smart and decided to close Indian Point. At around 6:14 a.m. this morning, a 2.2-magnitude earthquake was reported about three miles northwest of Mohegan Lake in Yorktown, according to the United States Geological Survey. The epicenter of the quake was in Putnam Valley.

Social media was rife with posts on the quake with people from Chappaqua, Cortlandt, Lewisboro, Mahopac and Putnam Valley chiming in with their rattling experiences, though it wasn’t nearly as strong as the 5.0 earthquake our forefathers experienced here in 1783.

1783 — The epicenter of a magnitude 5.0 earthquake may have been the Westchester-Putnam county line and was felt as far south as Philadelphia.

1884 — A magnitude 5.2 earthquake was centered off Rockaway, Queens, causing property damage but no injuries to people. A dead dog was reported.

1970 to 1987 — Between these years, instruments at the Lamont-Doherty Observatory in Rockland County recorded 21 quakes in Westchester and two in Manhattan.

October 1985 — A magnitude 4.0 earthquake was centered in an unincorporated part of Greenburgh between Ardsley and Yonkers. Tremors shook the metropolitan area and were felt in Philadelphia, southern Canada and Long Island.

April 1991 — A quake registering between magnitude 2.0 and 2.6 struck Westchester and Fairfield, Conn. It lasted just five seconds and caused no damage.

January 2003 — Two small earthquakes struck the area surrounding Hastings-on-Hudson. One was a magnitude of 1.2, the other 1.4.

July 2014 — “Micro earthquake” struck, 3.1 miles beneath the Appalachian Trail in a heavily wooded area of Garrison.

January 2016 —  A 2.1 magnitude earthquake occurred at 12:58 a.m. northwest of Ringwood, N.J., and the earthquake was felt in the western parts of Ramapo, including the Hillburn and Sloatsburg areas. 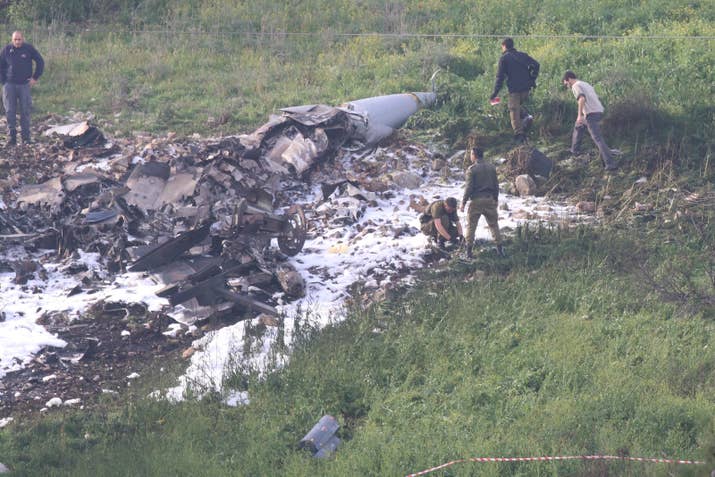 An Israeli F-16 fighter jet was shot down by Syrian anti-aircraft fire on Saturday morning, following a renewed set of strikes that mark a serious escalation in the conflict.

Israel’s military said the new strikes were a retaliation to an Iranian drone launched from Syria into Israel, which was intercepted.

“A combat helicopter successfully intercepted an Iranian UAV [unmanned aerial vehicle] that was launched from Syria and infiltrated Israel,” the military said on Saturday, adding that the drone had been “under surveillance until the interception.”

Iran is an ally of Syrian President Bashar al-Assad, and Israel is concerned about its growing military presence in the country.

Israeli military spokesperson Lt. Col. Jonathan Conricus said Iran was “responsible for this severe violation of Israeli sovereignty” in a tweet shortly after the incident.

“Twelve targets, including three aerial defense batteries and four Iranian targets that are part of Iran’s military establishment in Syria were attacked,” the military said in a statement.

“During the attack, anti-aircraft missiles were fired towards Israel, triggering alarms that were heard in Northern Israel,” it added.

Conricus later tweeted that Israel is “ready for all scenarios.”

Yet the Syrian military denied that the drone violated Israel’s airspace. In a statement on Central Military Media, it said the claim was “a lie and misleading,” and that the drone had been on a regular mission to collect information on ISIS.

Israel’s subsequent strike on a drone station in Homs province was a “terrorist act,” it said, adding that there would be “a tough and serious response.”

The deputy head of Iran’s elite Revolutionary Guards Corps declined to comment on reports of the intercepted drone, according to the Tasnim news agency.

“We cannot confirm this report on the drone because Israelis are liars. … If Syrians confirm it, Iran will confirm it as well,” Brig. Gen. Hossein Salami reportedly said.

A Syrian official on state TV called the raids a “new aggression,” and said that anti-aircraft fire hit more than one Israeli plane. Israel only confirmed that one plane had been shot.

One of the pilots who escaped the F-16 jet crash was seriously wounded and evacuated to hospital, the Israeli military said. The other sustained light injuries.

In a statement on Saturday, Hezbollah, a Shiite Islamist party and militant organization in Lebanon, said the jet crash marks the “start of a new strategic phase” that will limit Israeli “exploitation” of Syrian airspace.

The military flare-up between Israel and the forces allied with the Assad regime is the latest sign that Syria’s complicated seven-year war is worsening instead of winding down.

Over the past three weeks, Turkey launched a military offensive in Syria’s northwest to dislodge a Kurdish militia; the regime intensified air strikes on civilians in rebel-held territories; and US forces fighting against ISIS decimated a group of regime troops attacking its local allies. Meanwhile, a Jan. 30 attempt by Russia to cobble together peace talks in the city of Sochi ended in failure.

Russia’s foreign ministry expressed concern at the escalating violence in Syria and called for all sides to show restraint, while calling for other nations to respect Syria’s borders and sovereignty.

“Of particular concern is the danger of escalation of tension within and around de-escalation zones in Syria, the creation of which has become an important factor in reducing violence on Syrian soil,” its statement said.

“We urge all parties involved to exercise restraint and to avoid any actions that could lead to an even greater complication of the situation. We consider it necessary to unconditionally respect the sovereignty and territorial integrity of Syria and other countries of the region.

“It is absolutely unacceptable to create threats to the lives and security of Russian servicemen who are in Syria at the invitation of its legitimate government to assist in the fight against terrorists.”

— This is a developing story, check back for updates.

Borzou Daragahi is a Middle East correspondent for BuzzFeed News and is based in Istanbul.

Who Killed the Civilian Contractor in Iraq Rocket Attack?