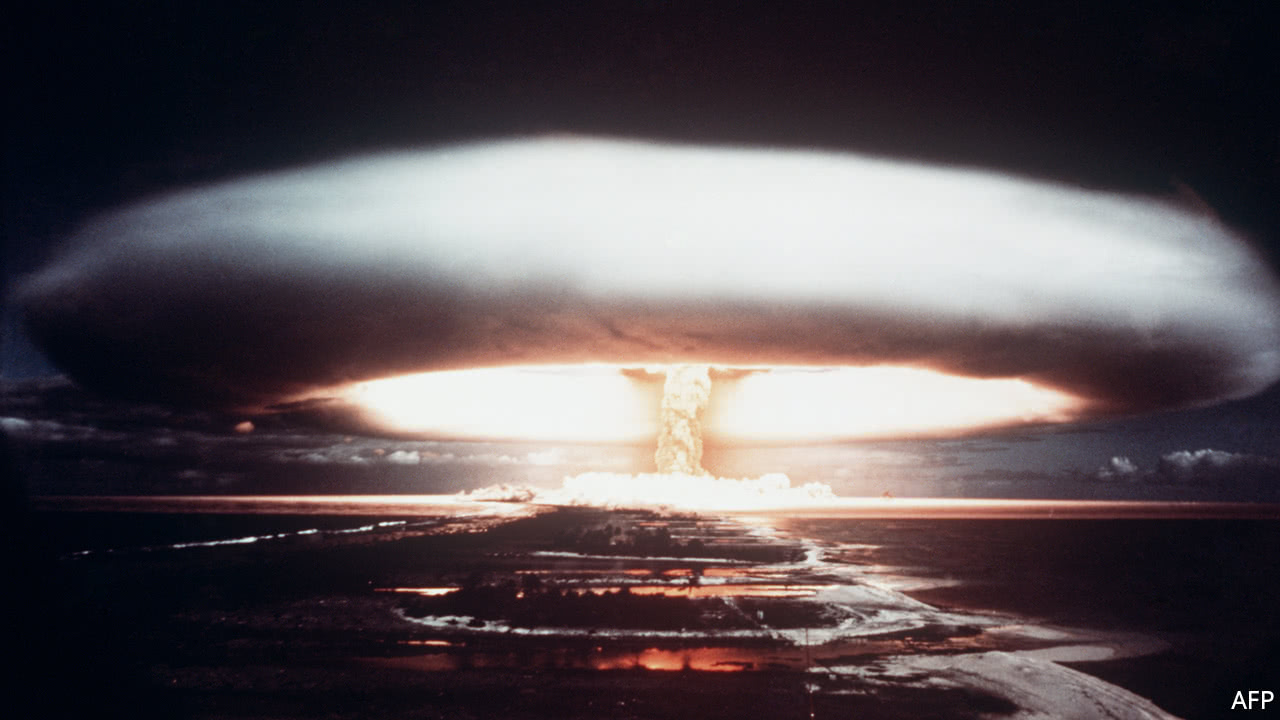 How Christianity has dealt with nuclear weapons

Aug 20th 2017
WHERE have Christians stood in the debate about nuclear weapons? How have practitioners of the world’s most popular religion answered the moral dilemmas posed by devices that could bring all human life to a horrific end? Given that the controllers of the world’s two main nuclear arsenals both claim to be champions of the Christian cause, the question is topical, not just an academic brain-teaser.

And the best answer is that right from the beginning of the nuclear age, Christians have found themselves on both sides, often in rather dramatic ways. This month’s war of words over North Korea have brought reminders of that paradox.  Soon after President Donald Trump issued his threat of “fire and fury”, a theological battle broke out through the medium of America’s leading newspapers. Robert Jefress, one of Mr Trump’s favourite pastors, stated that God had given the president authority to “take out” North Korea’s leader. Elaborating in an interview with the Washington Post, he said worldly leaders had been endowed with “full power to use whatever means necessary, including war, to stop evil.”
The Dallas-based preacher didn’t explicitly urge Mr Trump to tee up his nuclear weapons but he heartily endorsed a presidential stance which did make that threat. An Episcopal priest, Steven Paulikas, shot back with an op-ed in the New York Times which described the Texan’s theology as “shockingly misinformed and dangerous”.As Mr Paulikas argued, Saint Paul’s injunction to respect earthly powers was not meant to be a carte blanche to use violence; rather it referred to practical matters like taxation. “A wiser spiritual adviser than Jefress would counsel the president that there is no conceivable argument to be found in Christian scriptures for threatening death and suffering on a huge scale,” the Anglican added.
When the nuclear era dawned, Christians were “on both sides” in a more literal sense. The American aircraft which obliterated Hiroshima and Nagasaki were crewed by Christian servicemen and counseled and blessed by Christian military chaplains. And Nagasaki, as it happened, was the main bastion of Japanese Christianity, a tradition which had survived harsh persecution between 1600 and 1850.  Its Urakami cathedral was an early mega-church with 12,000 members, and it provided the bombers with a landmark that could be identified at 31,000  feet.  It has been estimated that 8,500 of those faithful died as a direct or indirect result of the bomb. Worshippers attending Thursday morning confessions were annihilated instantly by the fireball which exploded 500 metres above the house of prayer.
Then there were those who changed sides. Father George Zabelka, the Catholic chaplain of the American air force group which delivered the bombs, underwent a conversion to pacifism after the full results of the explosions became clear. He travelled to Nagasaki on the 50th anniversary of the bomb and made a tearful plea for forgiveness.
William Downey, the airmen’s Lutheran pastor, experienced a similar change of heart. In the Roman Catholic world’s intellectual stratosphere, meanwhile, there was a more gradual sea-change. After centuries of elaborating a just-war doctrine, a succession of popes and their brainiest advisers came to the conclusion that nuclear weapons had changed the ethical calculus over war.  As early as 1954, Pope Pius XII seemed to foresee a time when the “evil consequences of adopting this method of warfare” would “pass entirely beyond the control of man.”
A recurring theme of Christian reflections about the first nuclear explosions is the idea their murderous flashes form a grotesque counterpoint to the Transfiguration: the moment when Jesus of Nazareth is said to have appeared to three of his disciples in a blinding flash of light, giving them a new understanding of his divinity. The Transfiguration is celebrated by most Christians on August 6th, the anniversary of Hiroshima; Russians and some other Orthodox Christians marked the feast yesterday, the old-calendar date.
According to an essay by Nicholas Sooy, a young American Orthodox Christian scholar, both the Transfiguration and Hiroshima are remembered as moments when “there was a great cloud, and the light radiated forth brighter than the sun” and “there was a thunderous sound as if the heavens had opened..” But the first incident is presented as one of reassurance and inspiration, while the second one delivered a message of apocalyptic fear, one that disfigured the world through the ongoing effects of radiation.
Mr Sooy is a leader of the Orthodox Peace Fellowship, an anti-violence fraternity whose founders belong to the Russian Orthodox parish in Amsterdam.
But plenty of other voices can be heard in the world of Russian Christianity.  One of Russia’s nuclear bureaucrats has noted with approval that by organising conferences and stimulating debate in a patriotic spirit, the country’s national church had helped to preserve the nuclear arsenal and concentrate minds on the need for a strategic deterrent; this had been an important counterweight to the sloppy pacifism which maintained that Russia had no enemies.
Russian clergy are regularly seen blessing nuclear arms; they would defend that practice by saying the point of such blessings is to pray that the weapons will not be used. In other words, that the rockets will stay in their silos and do their job.
The one thing organised Christianity doesn’t seem to offer is a clear, unanimous answer to the dilemmas of a nuclear age. But its cacophony of voices does throw those dilemmas into even sharper relief.

China Nukes UP the Pakistani Horn

Wickedness before the Bowls of Wrath: Revelation 16

More than 50 million people affected by conflicts outside the Temple Walls: Revelation 11

Israel is Headed for War Outside the Temple Walls: Revelation 11