Written by: Daniel Jennings Current Events July 31, 2014
Most Americans have a reasonable chance of experiencing a destructive earthquake within the next 50 years, the US Geological Survey (USGS) has concluded.

The survey’s new National Seismic Hazard Map show that the risk of earthquakes in parts of the country — such as the Midwest, Oregon and the Rocky Mountains — is far higher than previously thought. All total, Americans in one-third of the country saw their risk for an earthquake increase.
“I worry that we will wake up one morning and see earthquake damage in our country that is as bad as that has occurred in some developing nations that have experienced large earthquakes,” Carl Hedde, a risk management expert at insurer Munich Reinsurance America, said of the map in The Wall Street Journal. “Beyond building collapse, a large amount of our infrastructure could be immediately damaged. Our roads, bridges and energy transmission systems can be severely impacted.”
Among the findings:

“We know the hazard has increased for small and moderate size earthquakes,” USGS scientist William Ellsworth told The Journal. “We don’t know as well how much the hazard has increased for large earthquakes. Our suspicion is it has but we are working on understanding this.”
Frightening Results From New Study
The USGS used new computer modeling technology and data collected from recent quakes such as the one that struck Washington, D.C. in 2011 to produce the new maps. The maps show that many Americans who thought they were safe from earthquakes are not.
New Relocation Manual Helps Average Americans Get Out Of Harms Way Before The Coming Crisis
Some of the survey’s other disturbing findings include:

“Obviously the building codes throughout the central U.S. do not generally take earthquake risk or the risk of a large earthquake into account,” USGS Seismologist Elizabeth Cochran told The Journal. Her take: Earthquake damage in the central US could be far greater than in places like California, because structures in some locations are not built to withstand quakes.
Others agree.
“Earthquakes are quite rare in many places but when they happen they cause very intense damage because people have not prepared,” Mark Petersen, the project chief for the USGS’s National Seismic Hazard Map, told The Journal.
This new map should be a wakeup call for Americans.

A small earthquake was reported on Tuesday morning in upstate New York.
The United States Geological Survey’s website says the small-shaker hit about 25km from Potsdam at 6:07 a.m. and was 6 km deep. It registered a tiny 2.1 on the Richter Scale.
Several residents reported the trembles and the reports were reviewed and confirmed by a seismologist. According to the same website the earthquake was measured and determined to be 6.0 kilometers below earth’s surface. The highest level on the Richter scale is 5.0.
There are no reports of injury.
According to a map on the USGS site, this is the 17th quake to hit the Empire State this year. The largest, a 2.2 magnitude, came on June 30th near Ticonderoga, NY.

NEW DELHI: The first ever shipment of uranium from Australia — having world’s biggest reserves of yellow cake — is on its way to India elevating strategic partnership to a new level, informed visiting foreign minister

Julie Bishop
She also suggested that China, pursuing an aggressive foreign policy, must adhere to international norms amid Sino-Indian border standoff.
“The first shipment of uranium under the commercial arrangement is on its own way to India. The parliamentary clearance for uranium supplies was approved in Australia.India and Australia have also agreed on nuclear safeguards agreement,” the Minister told a select group of reporters here on Tuesday after her meeting with the PM, Foreign Minister and Defence & Finance Minister.
India and Australia signed a civil nuclear pact in 2014 and Canberra has been a supporter of India’s entry into the NSG besides other export control regimes. Besides expansion of defence and security partnership, the ongoing standoff in Dokalam figured high on the agenda of Bishop’s meetings with PM and the two key Ministers.
“This is long term dispute. While maritime border disputes should be settled based on UNCLOS, land boundary disputes should be settled peacefully. We don’t want to see an escalation. Any miscalculation could lead to tensions,” Bishop remarked.
The visiting Minister was of opinion that China has an increasingly assertive foreign policy and it should adhere to international norms and order.
“India and Australia have a growing strategic and economic partnership to provide stability in the Indo-Pacific region. We hope to expand defence partnership besides working on counter-terror and countering violent extremism.”

When asked about India’s reluctance to include Australia in the Malabar Naval exercise, the Minister avoided a direct reply and said, “The matter is not upsetting.
Each country has different priorities. India and Australia have had bilateral Naval exercises. And Australia have series of bilateral military exercises and remain keen for more such exercise.”‘
“There are all indications from the top leadership of US that it is continuing with its pivot to Asia-Pacific. Besides President Donald Trump will attend East Asia Summit,” the Australian Foreign Minister pointed out. 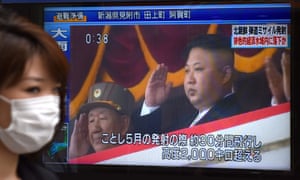 A brief research trip to Japan’s north-east coast to witness the aftermath of the March 2011 tsunami was all that it took to persuade Yoshihiko Kurotori to build a shelter in his back garden.

His home in suburban Wakayama is just a kilometre from the stretch of Pacific coast that scientists say is likely to be struck by a powerful earthquake and tsunami in the coming decades, causing an estimated 320,000 deaths.
“I saw the foundations of what had once been people’s homes and thought there and then that I needed to protect myself,” Kurotori said. “My neighbours asked me what on earth I was doing when the diggers arrived. They thought I was wasting my money, but you can’t put a price on safety.”
Missile experts have examined data from the test to analyse whether North Korea’s claim of being able to reach ‘anywhere in the world’ is true

He opened the shelter’s heavy steel door to reveal a tiny room encased by steel-reinforced concrete walls of up to 35cm thick. The centrepiece is a Swiss-made 1.8m yen (£12,200) ventilation unit designed to keep the shelter’s occupants alive while it filters out radioactive particles and nerve gases such as VX and sarin.
But today, it is the potential for a manmade disaster, not a natural calamity, that has convinced the retired teacher that he was right to part with almost 8m yen to build the tiny shelter.
Multiple missile tests conducted by North Korea this year, culminating in the launch of an intercontinental ballistic missile, have sparked alarm in Japan, and ushered in a flurry of civil defence activity not seen since the second world war.
Nine towns have conducted evacuation drills since North Korean missiles landed in the sea inside Japan’s exclusive economic zone in March, with around a dozen more expected to follow soon.
A 30-second government warning, aired on primetime TV, implores people to seek shelter in sturdy concrete buildings or flee underground in the event of an attack. Those stranded in their homes should hide behind sturdy objects, lie face down on the floor and stay away from windows.
And sales of nuclear shelters, air purifiers and gas masks are soaring.
Seiichiro Nishimoto, whose company built Kurotori’s shelter, said inquiries had risen dramatically since the start of the year. His Osaka-based company has sold more than a dozen shelters in the past two months – twice as many as it used to sell in a year.
“Most of our customers are worried about nuclear fallout from a North Korean attack,” Nishimoto, 80, said. “I think we should have shelters everywhere in Japan. People complain about the cost, but the smallest ones are no more expensive than a family car.”
Nishimoto added he had taken three orders in the past week and was in talks with the owners of an apartment block to install a communal shelter.
Nobuko Oribe, the director of Oribe Seiki Seisakusho, said her firm had received twice as many orders in April and May than during the whole of 2016. “But there’s a limit to how many people can build a shelter, and the government won’t do it for them,” she said. “We went through Hiroshima and Nagasaki, and now, 70 years later, people are worried about nuclear attacks again.”
The firm, founded by Oribe’s grandfather just after the Cuban missile crisis, offers a range of shelters, including one for up to 13 people that costs 25m yen.
Some have accused Japan’s conservative prime minister, Shinzo Abe, of seeking to exploit fears of war with North Korea to justify record defence spending and controversial plans to revise Japan’s “pacifist” constitution.
In April, he contributed to public unease when he claimed that North Korea may have the technology to equip ballistic missiles with warheads containing sarin nerve gas – the substance used in the 1995 Doomsday cult attack on the Tokyo subway.
The same month, there was criticism after trains on the Tokyo subway were momentary halted after reports that North Korea had test-fired a missile – a measure that hasn’t been introduced in Seoul, which is just 35 miles from the heavily armed border with the North.
The concern felt by many Japanese, however, is not entirely misplaced. When North Korea’s quest for a nuclear deterrent began two decades ago, Pyongyang launched a missile in 1998 that flew over Japanese territory before landing in the Pacific. The ICBM tested this week ended its flight in the sea inside Japan’s exclusive economic zone.
Japan’s government estimates it would take only 10 minutes for a missile to cover the 1,600 km between its North Korean launch site and a US military facility on the southern Japanese island of Okinawa.
Fear of nuclear fallout reaches deep into the popular psyche of a country that was twice targeted by atomic weapons. But Kurotori said more than seven decades of peace had made his compatriots complacent.
“The problem with Japanese people is that we are take peace for granted,” he said. “They think the government will take care of everything, and that as long as we have an anti-war constitution that we’ll be fine.
“But just look around … Japan is surrounded but instability, on the Korean peninsula, in the South China Sea.”

Japan is surrounded but instability, on the Korean peninsula, in the South China Sea

At 75, he is unsure if he will live to see the Nankai earthquake and tsunami some experts predict will strike the region in the next 30 years. And he denies he is being alarmist over North Korean missiles.
“Life is all about luck, you never know what lies around the corner,” he said. “It’s about being in the wrong place at the wrong time.
“I don’t know where I’ll be if and when North Korea attacks, and I understand why my neighbours think I’ve gone over the top, but all I want to do is improve my chances of survival. I don’t see anything wrong with that.”