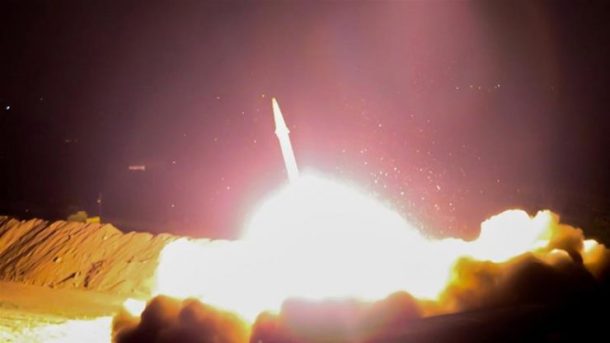 Khamenei: Iranian missile strikes on Syrian province ‘act of worship’
In a meeting with Revolutionary Guards commanders, Iran’s Supreme Leader Ali Khamenei likened the Iranian missile attack launched from the Islamic republic against ISIS sites in the Syrian province of Deir el-Zour to an “act of worship” during the holy month of Ramadan for Muslims, Iranian news agencies reported on Thursday.
Iran’s news agency ISNA said that the meeting between Khamenei and the leaders of the Islamic Revolutionary Guard Corps (IRGC) took place two weeks ago, a few hours after the missile strikes were launched the provinces of Kurdistan and Kermanshah.
“What you have done is wonderful, may God accept your good deeds, this is what it means to worship in the month of Ramadan,” he said.
June 24 was the last day for the month of Ramadan in 2017.
Khamenei also called for expanding the missile industry, when he said: “Do everything you can to develop the missiles, notice how your enemy fears it. Be aware of the importance of what you are doing in this area.”
Iran’s missile activities have sparked widespread debate in the West, particularly in the United States, where US government institutions, including Congress have imposed sanctions against Tehran’s missile activities.
According to the Persian-speaking war reports, which track Iran’s military intervention in Iraq and Syria, IRGC’s claims were similar to the Russian statements that bombed civilian targets under the pretext of targeting ISIS headquarters.
A spokesman for the Iranian Revolutionary Guard, Brigadier General Ramadan Sharif, told the Iranian agency Tasnim that the strikes were coordinated with Damascus, adding that the missiles crossed the Iraqi airspace.
Meanwhile, observers believe that Iranian authorities sought to conceal this meeting to make sure that the missiles had hit the right targets. Some reports said four out of the six missiles launched fell in Iraq on its way to Syria.
Press reports had previously confirmed that Iran’s rocket attacks on Deir el-Zour in eastern Syria have hit civilian targets, contradicting IRGC’s claims.
Iranian media had published a clip claimed it showed the launch of the Zulfiqar missiles on ISIS targets, but maps, photographs and video clips broadcasted by Iranian agencies showed no actual sites of the militant group.
(The article was originally published at the Arabic language website for Al Arabiya News Channel)

NEW YORK CITY (PIX11) – For the last 43 years John Armbruster has been a seismologist with Columbia University’s Lamont Doherty Earth Observatory.  A veteran of what he describes as “a couple of dozen” quakes, he is interested in the seismic activity throughout the Pacific region in recent weeks.
However, does the amount of plate movements around the world in recent weeks as well as years to translate to New York City being more vulnerable, “These earthquakes are not communicating with each other, they are too far apart,” said Armbruster in an interview with PIX 11 News on Wednesday.
Nonetheless, Armbruster added that there are many faults around the area and a few in Manhattan, including on specific fault capable of producing a magnitude 6.0 earthquake, “The 125th street fault.”
What would a magnitude 6.0 earthquake inflict upon the city?
“I think there would be serious damage and casualties,” said Armbruster.  The reason?  Most of the buildings and infrastructure was not constructed  to withstand earthquakes.  This said, what does Armbruster think of the chances of a major earthquake catching New York City by surprise?
“We know that its unlikely because it hasn’t happened in the last 300 years but the earthquake that struck Fukushima Japan was the 1000 year earthquake and they weren’t ready for the that.

Nuclear war would cause a global famine and kill billions, study finds: Revelation 8

IDF destroys tunnel meant to transport terrorists from outside the Temple Walls: Revelation 11