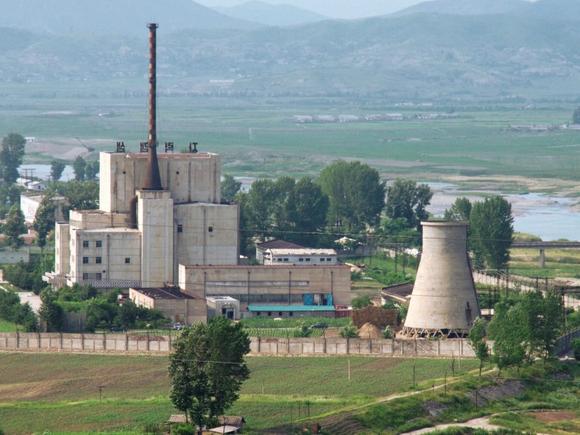 A North Korean nuclear plant is seen in Yongbyon, in this photo taken June 27, 2008 and released by Kyodo.
Credit: Reuters/Kyodo

(Reuters) – North Korea may be trying to restart a nuclear reactor that can yield plutonium for atomic bombs, a U.S. security think tank said on Wednesday, citing new satellite imagery.

An analysis issued by 38 North, a North Korea monitoring project at Johns Hopkins University in Washington, said it was too early to reach a definitive explanation for signs of activity at the Yongbyon reactor, including steam and indications that snow had melted on the reactor roof.

“One possibility is that the North Koreans are in the early stages of an effort to restart the reactor after an almost five-month hiatus in operations,” it said, basing its observations on commercial satellite images from Dec. 24 to Jan. 11.

“However, since the facility has been recently observed over a period of only a few weeks, it remains too soon to reach a definitive conclusion on this and also on whether that effort is moving forward or encountering problems.”

It said there were clear differences between the latest 2014-1015 imagery and that from more than a year earlier when the reactor was known to have been operating.

Imagery from December 2013 showed snow had melted off the roofs of all the buildings related to the reactor and foam could be seen at the end of the turbine building’s steam and wastewater drainpipe. It said the absence of the foam in recent images could be related to the installation of new piping.

North Korea announced in April 2013 that it would revive the aged five-megawatt research reactor at the Yongbyon nuclear complex, saying it was seeking a deterrent capacity, a move condemned by members states of the U.N. nuclear watchdog, the International Atomic Energy Agency.

The Washington-based Institute for Science and International Security think tank said last year that satellite imagery from late August and late September 2014 indicated the reactor may have been partially or completely shut down, while images from September 2013 until June last year had shown it was operating.

It said the purpose of the shutdown may have been for it to partially refuel the reactor’s core, or for maintenance or renovation.
North Korea is under an array of international sanctions for repeated nuclear bomb and ballistic missile tests.

It said this month it was willing to suspend nuclear tests if the United States called off annual military drills with South Korea. Washington rejected the proposal as a veiled threat.