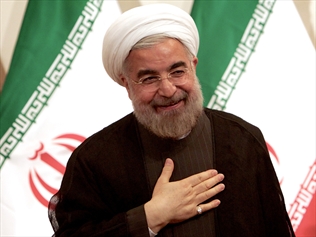 RAN’S newly-elected president Hassan Rowhani has ruled out any halt to the nuclear activity that has drawn UN sanctions but hopes an early deal can be reached to allay the concerns of major powers.

The moderate cleric, who won outright victory in Friday’s presidential election on the hopes of millions for an end to the economic hardship caused by Western sanctions, on Monday pledged greater transparency in the long-running talks.
Rowhani, addressing his first media conference since winning the vote, said there would be no change in Iran’s longstanding alliance with Syrian President Bashar al-Assad that has been the source of additional Western concern.
But he said he would seek to thaw relations with the key Gulf Arab backers of the rebels fighting to oust Assad’s regime for more than two years.
Rowhani, who led the nuclear negotiating team under reformist former president Mohammad Khatami from 2003-5, said there could be no return to the moratorium on uranium enrichment that Iran accepted at the time.

“This period is over,” he said.

When Rowhani stepped down, outgoing President Mahmoud Ahmadinejad resumed uranium enrichment, triggering successive UN security council ultimatums to suspend it, some of them backed up with sanctions.
Iran has since massively expanded its facilities for the enrichment of uranium, extending the process to 20 per cent and raising the fears of regional foe Israel that the 90 per cent required for a warhead is but a step away.
The 64-year-old Rowhani said that the EU and US sanctions against Iran’s oil and banking sectors that have sent the economy into freefall were unjust but promised transparent talks to try to resolve the underlying issues.
Iran will be “more transparent to show that its activities fall within the framework of international rules,” he said.
“The idea is to engage in more active negotiations.”
Britain, one of the powers involved in the Iran nuclear talks, warned Rowhani that he should be in no doubt about the West’s resolve.
Foreign Secretary William Hague told parliament he hoped Tehran would now “engage seriously”.
“The government hopes that following Dr Rowhani’s election, the Iranian government will take up the opportunity of a new relationship with the international community by making every effort to reach a negotiated settlement on the nuclear issue,” he said.
“If Iran is ready to make that choice, we are ready to respond in good faith.”
On a visit to Iran’s western neighbour Iraq on Monday, the chief negotiator of the major powers, EU foreign policy chief Catherine Ashton, said she would take Rowhani up on his promise of more constructive engagement.

The Countermeasures of the Chinese Nuclear Horn (Daniel 7)

The Power of the Bowls of Wrath (Revelation 16)

Mayors will lose their fight against Trump over martial law

Soldiers Abduct A Palestinian, Injure Many Outside the Temple Walls (Revelation 11)